Don't miss the current winner of the BAFTA Award and the Oscar nominee in the Biography Dox section. 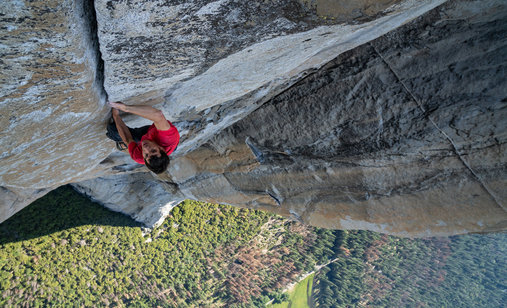 The latest National Geographic's documentary, Free Solo, directed by Elizabeth Chai Vasarhelyi and Jimmy Chin, to be screened at this year's ZagrebDox in the official Biography Dox section, won the BAFTA Award for Best Documentary. He was nominated for the prize together with two other documentaries included in this year's ZagrebDox program - They Shall Not Grow Old by Peter Jackson and Tim Wardle's Three Identical Strangers. Prior to nominations for the Oscar and BAFTA Awards, Free Solo won the best documentary award at the 43rd Toronto International Film Festival.

The most fearless among mountaineers are the free solo climbers who do not use ropes or any other kind of safety equipment. They also climb at great heights, so even the tiniest mistake could be fatal. This is Alex Honnold’s speciality. Free Solo follows the American soloist Honnold as he prepares to climb El Capitan, the legendary 900-meter vertical rock face in Yosemite National Park. Even with safety equipment, it is an incredibly difficult climb. Ascending it requires complete focus, and Honnold believes that is why his first attempt fails – he feels there are too many people watching, and that includes the film crew. Honnold talks about what motivates him to be a free solo climber, about his fears, his family, and his blossoming relationship with fellow climber Sanni McCandless.