"The Magic Life of V" by Tonislav Hristov, "Stone Speakers" by Igor Drljača, "In Between" by Samir Karahoda, "Border Fence" by Nikolaus Geyrhalter, Vitaly Mansky's "Putin's Witnesses" and "Hungary 2018" by Eszter Hajdú. 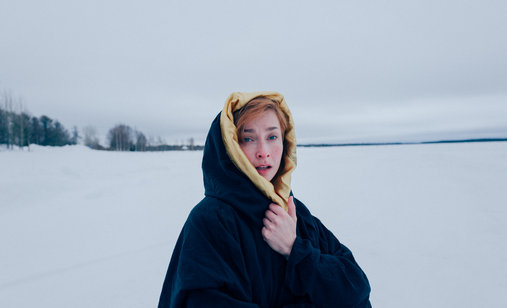 Several amazing documentaries selected for the renowned international film festivals like Sundance, Berlinale and Trieste will be screened at this year’s ZagrebDox as well. Arriving from Sundance and Berlinale to ZagrebDox’s competition will be The Magic Life of V by Tonislav Hristov. It is a film about Veera, a 25-year-old girl trying to get rid of childhood traumas through LARP. She becomes V, the heroine of her story who can do what Veera can’t – meet and face her father.

Shortly after screening in the official selection of Berlin International Film festival, Zagreb audience will be able to see in the regional competition the Kosovar film In Between by Samir Karahoda and The Stone Speakers by Igor Drljača, a Canadian and Bosnian and Herzegovinian co-production.

In Between follows brothers and sons living abroad and building identical houses to express family equality and solidarity. Karahoda opens up a broader social issue and wonders about the lives of those who left for economic reasons and are now trying to fit in the culture that is not theirs. In Between is the first Kosovar film to be selected for Berlinale, and its regional premiere will take place at ZagrebDox. The Stone Speakers portray the evolution of alternative tourism in post-war Bosnia and Herzegovina, a country whose society is still deeply divided and the economy never recovered from the consequences of war. Međugorje, salt lakes in Tuzla, Andrićgrad in Višegrad and pyramids in Visoko are the most famous such destinations and source of income for the local population. These are the places combining history, religion, politics and folklore to create new tales of Bosnia. The film premiered at the Toronto festival.

Trieste Film Festival sends ZagrebDox three interesting titles. The Masters of Dox section presents Border Fence by Nikolaus Geyrhalter and Putin’s Witnesses by Vitaly Mansky, and the regional competition screens Hungary 2018 by Eszter Hajdú. In Border Fence Geyrhalter speaks about the burning issue of refugees. The film documents the Alpine Brenner border, where in 2016 the Austrian government announced the construction of a border fence, predicting a turn of the refugee routes to Italy after the closing of the Balkan route. Brenner was portrayed as the scene of change in the European internal affairs, and described through precision footage, the director’s trademark, and long conversations with police officers, local population, mountaineers, farmers, pub owners. The citizens equally fear the fence and the surge of refugees into their country. This small space unmasks all the colours of the political views on the subject that affects the entire Europe. The film won an award at the festival Diagonale in Graz and was also screened at IDFA.

Vitaly Mansky’s latest documentary Putin’s Witnesses follows the events that kicked off on 31 December 1999, when Yeltsin as the first democratically elected president of Russia turned the power to the hands of Vladimir Putin. At that time director Mansky was working as a documentary programme editor on Russian state television and had access to the Russian president and his political rise. Very few could assume back then that Putin would rule until this day. Almost 20 years later Mansky returns to his archive materials, questioning his own role in this historical turning point. The film has so far been screened at many international festivals, including IDFA, and won awards in Stockholm, Camden and Karlovy Vary.

Hungary 2018 takes us behind the scenes of democracy in the politically devastated Hungary. Twenty-eight years after the fall of communism and ahead of the new presidential election, in 2018 Hungary arrived to a political crossroads. Will the country embrace another four years of rightist populism with Viktor Orbán and his Fidesz party, or will former prime minister Ferenc Gyurcsány and his pro-European leftist party prevail? Hungary 2018 is more than a portrayal of a political struggle, it is a film about the rise of nationalism and rightist extremism in Europe. This important film, symptomatic of the current European and regional political situation, was screened in the feature competition at IDFA.