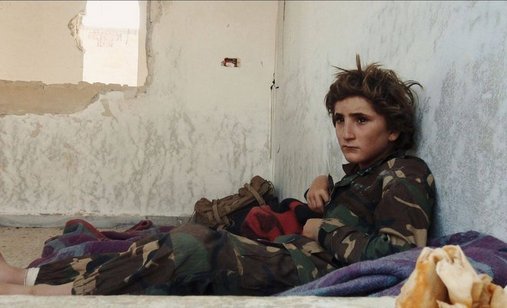 Our Grand Jury award goes to a film that shows a father transform his sons from children to trained killers. Thanks to the immense risks taken by the filmmaker, we’re exposed to a chilling combination of love and extremism passed down from one generation to the next. The Grand Jury Award for International Competition goes to Talal Derki’s OF FATHERS AND SONS.

Set in a post-Soviet country, this film explores, with empathy and enthusiasm, an industrial ghost town that still stands, thanks to the enduring character of its citizens, who fight daily against a setting sun of old-world ritual and community. Our International Competition Special Mention goes to Rati Oneli’s CITY OF THE SUN.

A film that fluently brings together a narrative of extreme opposites, combining the ordinary and the epic. Intimate scenes of a mother-daughter relationship play out against the backdrop of a turbulent history, in a country that continues to change. We have admired the clear structure of a complex narrative, as well as the sensibility to capture great documentary moments. Our Jury gives the Big Stamp Award for Best Film in Regional Competition to THE OTHER SIDE OF EVERYTHING.

An exciting and distinct cinematic exploration of manhood, competitiveness and the progression from innocence to toxicity, of the games we play.

Where society has rendered them voiceless, through the tool of cameras, these two protagonists discover the right to articulate their own vision of society and reclaim their identity.

Little Stamp Award goes to the film OVER THE LIMIT – for the masterful portrayal of strong archetypal characters in a powerful classical conflict using only the inherent tools of documentary observation.

Special Mention goes to the film LIYANA – for creating an artistic hybrid structure which skilfully intertwines the process of learning to live with the poetics of genuine children's imagination.

Every film in this year’s Movies That Matter selection could be said to be important in its own way. Either in terms of an innovative approach to the notion of human rights, either by bravely documenting their breach, or by portraying people who were in some sense instruments of change, the films in this selection are the current diagnosis of mankind and a filter checking the amount of human qualities still left in us. The jury decided to give this award to Talal Derki’s OF FATHERS AND SONS, a shocking tale of a Jihadi family in today’s Syria, about the ease of killing end even greater ease of justification, about the radicalisation of boys and first of all about the medium of this radicalisation – a manipulative relationship between a father – a member of Al-Nusra front – and his sons. Despite the fact that the author keeps aside in the film, consciously choosing to be an observer rather than a participant, this film is also trying to document the trauma of a person who moves further and further away from the country of his memories with every scene, and closer and closer to the realisation that this country is now gone forever. Although the scene often emit horror against a gloomy backdrop, this film has a powerful positive effect. The director’s courage in documenting an important story in extremely difficult conditions, risking even his own life, instils in the viewers a permission and an obligation to show courage as well.

In this disturbing portrayal of a mother who has spent over a decade in contemporary slavery, in our neighbouring country Hungary, the author takes great responsibility and risk and becomes one of the protagonists of this story. We see a woman who has long given up hope that state institutions might help her, but the fact that she became a subject of interest and observation in a documentary film gave her strength and prepared her to change. Documenting Marish’s escape and taking part in it, Bernadett Tuza-Ritter made an act of civil courage and a powerful statement criticising the state, showing how a documentary filmmaker’s job well done can radically change a person’s life and also how a publicly neglected issue will never again be neglected and cast aside.

Portraying a young mastermind of a militant movement gathering thousands of Slovakian teenagers, Jan Gebert gave us a valuable insight into the state of European post-transitional society tolerating the increasingly radical answers to contemporary global trends. The Slovakian recruits are a certain European counterpart to the radicalisation presented by Derki in Of Fathers and Sons. But while the Jihadi recruits shock us primarily with their cruelty, lack of alternative and intelligent regime, the story of the European militants will at a certain point make us laugh over the open and somewhat clumsy ambition of a young aspiring politician, but also inspire caution with the scenes making it clear that state institutions like police and schools treat uniformed nationalists quite casually, or even with approval. Boys will be boys. The film leaves an impression that the central theme and protagonists reveal themselves effortlessly, without the director’s intervention. However, this is only the proof of the author’s immense talent.

This simple film depicts the essence of teenagers’ lives in the wastelands of Altay. We chose it because it asks a number of questions without offering specific answers, rather motivating us to think of them. This is achieved by way of an objective portrayal of life in cruel conditions led by children and teenagers forced to grow up before their time. The director managed to film magnificent shots to depict the cruelty of their present in which art nevertheless finds a way to survive.

The film outstandingly depicts the problems Konrad encounters while trying to find his path in life, and his relationship with the environment and family. In us it awoke a fear of failure and uncertainty, something all the young people of this world can relate to.

MY GENERATION AWARD
Awarded by the founder and director of ZagrebDox, Nenad Puhovski, for the film by the author of his generation
HUMAN FLOW
Ai Weiwei
Germany / USA

HUMAN FLOW is not only a monumental portrayal of one of the major crises of our times, but also a dramatic yet personal extension of Ai Weiwei's exceptional artistic work, and, last but surely not least, also a significant contribution to activities in the field of promotion of human rights.

An honourable woman who doesn't think she needs to be honoured. An apartment that was never intended to be an apartment but has existed like that for over seventy years. Pragmatism that became a passion upon the political stage. Mila Turajlić's film THE OTHER SIDE OF EVERYTHING manages not only to unite, but to reveal and even harmonise and is therefore the winner of the International Critics FIPRESCI prize.