The documentary film Speak So I Can See You received the award during the Agora Work in Progress workshop at the 58th Thessaloniki International Film Festival. 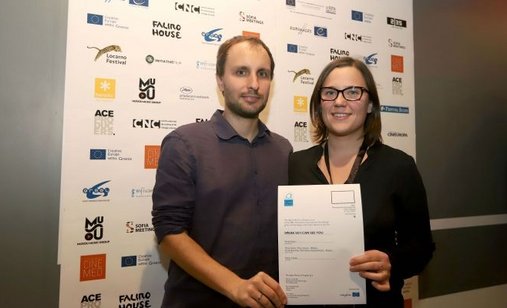 Documentary film Speak so I can see you was presented at ZagrebDox Pro 2017 and awarded with ZagrebDox Pro DCP award. The project was presentd by direcotr and producer Marija Stojnić and producer Miloš Ivanović.  Set at the intersection of an observational documentary and an audiovisual experiment, this film connects strangers from two opposite ends of a radio signal and questions the role of radio in contemporary life, finding the media a new purpose within a global epidemic of loneliness. The heroes of this film are the creators of Radio Belgrade – one of the oldest radio stations in Europe and the only one in Serbia which still airs and promotes cultural, artistic, drama and scientific programs – as well as their listeners.

Marija Stojnić is an award-winning director and producer, with a degree in Media Studies from The New School in New York and the Academy of Dramatic Arts in Belgrade. She has worked on numerous projects in the USA and in Europe, and since 2011 has been focused mostly on her own documentary projects. She is the recipient of an NYFA grant in the film and video category (2015), and from Instituto Sacatar, Brazil, in the same category (2017). She is the director of the award-winning short film Between Dream and Dream, the short documentary film Olympic Design: Lance Wyman (2012), as well as the short documentary musical Girl Who Opposed the Sun (2014).

The film is produced by Bilboke in Serbia (Marija Stojnić and Miloš Ivanović). The Croatian co-producers are Vanja Jambrović and Tibor Keser from Restart.