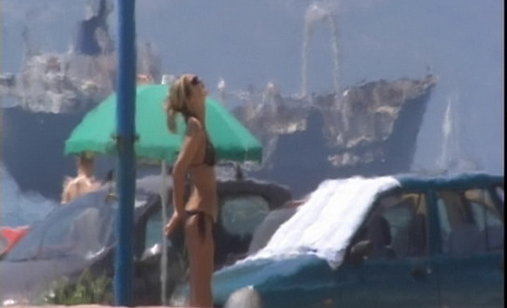 +
The swimmers and the sea, cars and ships, all flicker in the heat, like a moving watercolour.

In the city of Split, the beach at Žnjan was created by land filling the area with sand and gravel from the sea. Often serving as a parking space, it does not function as a real beach and it is perceived as a city beach for less well-off people. The film observes the people on the beach, seen through a strong telephoto lens in every-day situations typical for life on the beach. The swimmers and the sea, cars and ships, all flicker in the heat, like a moving watercolour. Their languid rhythm creates an image of their pure existence.

Boris Poljak, born in 1959 in Split, has worked as a professional cinematographer and director of photography since 1991. He has been awarded at various domestic and international festivals for his work (over fifty short documentary and experimental films, three feature films and over two hundred commercials). He has directed five short films, three of which as co-author with Damir Čučić. His film Autofocus (2013) received numerous awards at various international festivals, including the Grand Prix at the festival in Karlovy Vary. It was screened at the 2016 ZagrebDox, while his latest documentary They Just Come and Go (2016) screened in last year’s ZagrebDox Regional Competition. He was one of the organizers of the Parliament of Alternative Film in Split from 1982 to 1988 and one of the initiators of the International Festival of New Film in Split.