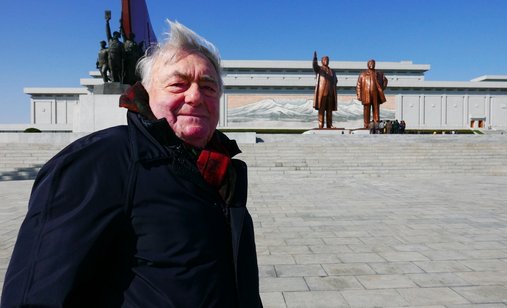 +
Lanzmann’s personal story about the unusual love he experienced briefly in 1958 in Pyongyang with Kim Kum-Sun, a Korean Red Cross nurse.

Napalm is the story of the breathtaking and brief encounter, in 1958, between a French member of the first Western European delegation officially invited to North Korea after the devastating Korean War (4 million civilians killed) and a nurse working for the Korean Red Cross hospital, in Pyongyang, capital of the Democratic People’s Republic of Korea. Nurse Kim Kun Sun and the French delegate had only one word in common, that both could understand: Napalm. Lanzmann returned to Korea without the permission to film and each take represents an extraordinary victory over the permanent control of the regime’s political police, who discovered the real reasons for his return, sixty years later, to the peninsula of this extreme North.

Claude Lanzmann, born in 1925, Paris, France, is French journalist, writer, and film director best known for his film Shoah (1985), a nine-and-a-half-hour documentary on the Holocaust. Lanzmann wrote and directed eight films on the Holocaust and Israel, using first-hand interviews to construct his narratives. Lanzmann’s first film, Israel, Why was released in 1973. Lanzmann relied on the same method of in-depth interviewing for his other major films: Tsahal (1994), Sobibor: October 14, 1943, 4 p.m. (2001) and The Last of the Unjust (2013).