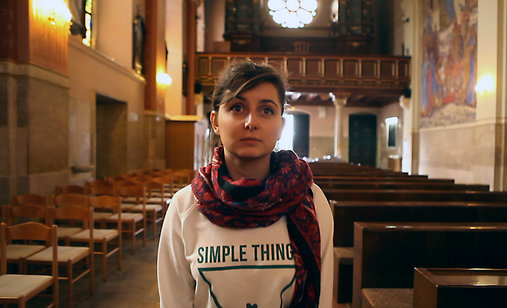 +
Kristina, an atheist who grew up in the most important Marian place of worship in Croatia, falls in love with a believer. When the subject of wedding drops, she has to decide whether to marry in church or not.

Kristina grew up in Marija Bistrica, the most important Marian place of worship in Croatia. Everyone around her is religious – except her. Even though Croatia is a secular country, these days school catechism textbooks teach that atheists are mindless, the Education Minister does not believe in evolution, and kids get stuffed Virgin Marys instead of teddy bears. The national television, where Kristina works, is likewise becoming an emissary of the Church. Tired of hypocrisy, Kristina decides to come out as an atheist. However, since life is always stranger than fiction, of all people, she falls in love with a believer. Krešo lives in Austria and she decided to move to be with him. Her parents are just coming to terms with recent news that their daughter is an atheist, when the other shoe drops – Kristina does not want to marry, especially not in a church wedding. Love is put to the test.

Višnja Skorin graduated in Editing from the Academy of Dramatic Art in Zagreb. Since 1998, she has worked at production studio Kenges as director and editor, and in 2008 she co-founded the 3D2D Animatori studio, specializing in animation film and special effects. Since 2011, she has taught courses on television and TV journalism at the Faculty of Political Science, as well as courses on editing procedures at Vern University of Applied Sciences.