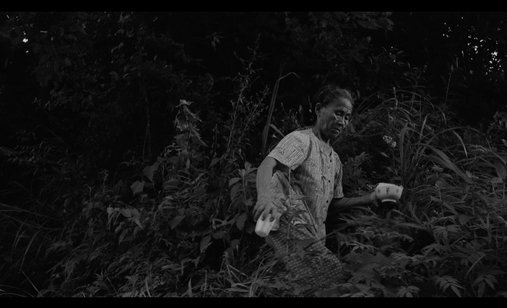 +
Filmed in black and white, this slow cinema piece spends four seasons with a family in Turtle Rock, a remote village in China.

Turtle Rock is a remote village in China named after a local rock formation that resembles a giant turtle. For nearly a century, the village has been home to just seven families who have only four surnames. They once moved to this mountainous region fleeing war, and have eked out a simple life there ever since. Filmmaker Xiao Xiao’s grandmother was one of the first people to be born in Turtle Rock, and it is also the place where he grew up. This allows Xiao to get very close to the residents, whom he observes lovingly as they chop spices or firewood, carry huge trunks of bamboo on their shoulders or unhurriedly fashion an iron pipe from an old tube – here, everything is recycled. The rustling trees and cackling chickens create a natural soundtrack to this rhythmic, beautifully framed documentary, which does not shy away from the harsher aspects of this life, far from the madding crowd.

Xiao Xiao was born in 1984, Hunan, China. Graduated from China Academy of Art, Hangzhou. Currently lives and works in Beijing as an artist and photographer with exhibitions held in Germany, France, Italy, Beijing, etc. Turtle Rock is his first independent film.