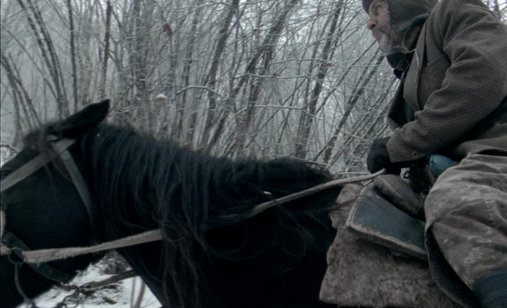 +
A story of wandering and fleeing, on the borders of Nagorno-Karabakh, an Armenian enclave in Azerbaijan.

Human beings who have experienced such a strong shock that they are no longer even afraid of death, as it often happens to genocide survivors, sometimes fall into what is known as a feeling or a ‘melancholy’ of timelessness. They live somewhat ‘outside’ time, a mode of extra-temporal existence, waiting for the day when they will free themselves from their suffering. It is these sort of people – the almost ghosts, who have survived the conflict in Nagorno-Karabakh between Armenians and Azerbaijani that has lasted for almost 20 years – that the filmmaker shows and listens to in his film. Behind them, behind their wandering bodies, behind their frenzies, is what remains of the collapse of the Soviet Union in Caucasus: ruins, uninhabited spaces, tombs, vestiges of war, trenches where soldiers watch for an invisible enemy.

Pierre-Yves Vandeweerd was born in1969 in Liége, Belgium. After studying Information, Journalism and Communication, as well as Anthropology and African Civilizations, Vandeweerd worked as a teaching assistant on the Université Libre de Bruxelles’ Faculty of Philosophy and Literature until 2003. From 2004 to 2008, he developed and ran Cinéma(s) d’Afrique(s), annual documentary film writing and directing residency for young Senegalese filmmakers. From 1998 to 2008, he served as co-director of Filmer à Tout Prix, the French Community of Belgium’s biennial documentary film festival.