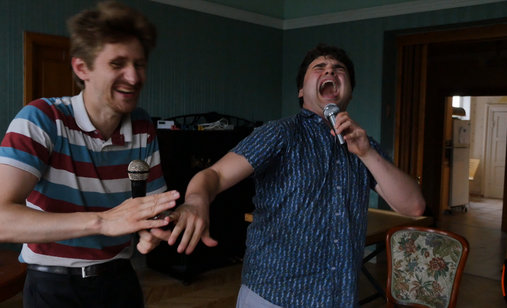 +
A touching yet humorous story about a mother and son.

Raitis Ozols is a computer programmer, mathematician and occasional magician. In his private life, however, things seldom work out with much mathematical precision. His relationship with his mother Silvija is particularly complicated. He discusses his inexplicable fear of his mother with his therapist, who would prefer for Raitis to look for a wife and organize his overflowing apartment. However, when Raitis reports Silvija to the police for emotional blackmail, bringing some order into his adult life becomes all the more difficult. We witness Raitis’s painful attempts to get closer to women and an awkward direct confrontation with his father, as well as a tragic attempt at celebrating Easter with his mother, brother and grandfather. The ease with which Raitis can do complex sums in his head contrasts starkly with the difficulties he experiences in his relationships.

Ieva Ozolina was born in 1974, Riga. Studied sculpture and ceramics at the Academy of Arts of Latvia. For more than ten years she curated museum exhibitions, did production design for theatre shows, participated in art symposiums and art shows. She took up film studies in the Academy of Culture of Latvia. Her graduation film My Father the Banker was awarded the Latvian national prize Big Kristaps. Her second documentary feature, Solving My Mother, was pitched at ZagrebDox Pro (program for professionals) in 2017.