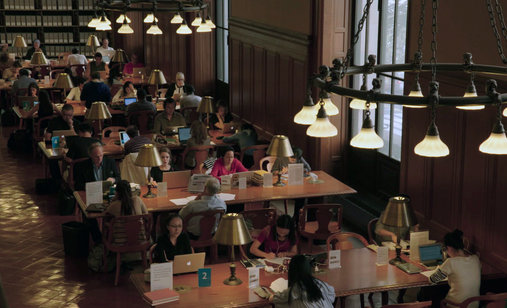 On Saturday the festival is hosting the famous French documentary filmmaker, cinematographer, editor and actress Claire Simon. ZagrebDox audience had a chance to see her documentary work during the past few days in her retrospective. A unique chance to have a chat to this distinguished director is made possible by the ZagrebDoXXL platform. After the film 800 Kilometres of Difference at 4pm, theatre 3, an extended Q&A session with the author will take place.

Several authors whose films are screened in regional and international competition will also take part in Q&A sessions: Austrian director Christian Tod, with his film Free Lunch Society (7pm and 8pm, theatre 3), about the possibility of a redistribution of power in political and scientific discussions on basic income. Serbian director Marko Cvejić in his film The Working Class Is off to Paradise (8pm, theatre 4) registers the daily lives of five former workers at the bankrupt industrial powerhouses in Zrenjanin (one of the most important economic centres in ex-Yugoslavia), today facing the reality of a society in transition. Another Q&A guest is Latvian director Ieva Ozolina after the film Solving My Mother (9pm, theatre 2), developed last year at ZagrebDox Pro, and the winner of a jury special mention for first-time filmmakers at IDFA.

At 7pm, theatre 3, the 14th ZagrebDox award ceremony will take place. At the same, theatre 1 will screen a selection of films from the Controversial Dox section: Project X by the Oscar-winning director Laura Poitras and Henrik Moltke, featuring the classified documents of the American National Security Agency and a mysterious journey from the National Business Park to a windowless skyscraper in central Manhattan. Another one is Pre-Crime by the German directing duo Monika Hielscher and Matthias Heeder, delving deep into the issue of 21st century security measures relying on big database systems and computer algorithms as strategies of implementing laws all over the world.

The Masters of Dox section screens two outstanding films. One is the last title by Joe Berlinger, one of the leading American documentary filmmakers. Intent to Destroy (6pm, theatre 5) gathers historians, scholars and top directors in a discussion about Turkish genocide over Armenians. The starting point is Terry George’s film The Promise starring Christian Bale, Oscar Isaac and Charlotte Le Bon about the consequences of Armenian genocide. The other is Ex Libris – The New York Public Library (9pm, theatre 1), directed by the renowned American filmmaker Frederick Wiseman. His main focus is research of American institutions, and this time he directed his attention towards the New York Public Library in a film which already won many prestigious awards and was shortlisted for this year’s Oscars.

The State of Affairs section begins at 6pm, theatre 1 with the short film Homeland by Sam Peeters and continues with Timothy George’s Brexitania, documenting the thoughts of a series of people of different backgrounds, including intellectuals Noam Chomsky and Saskia Sassen, about Britain’s leaving the EU.

The section In Focus: New Europe will round up its cycle with screenings at 6pm and 10pm. The first to screen will be The Red Soul (6pm, theatre 4) by Jessica Gorter, about the situation in Russia 50 years after Stalin’s death. The film portrays the past living in Russia today and paving the way to the future of the country through a jigsaw puzzle of intimate portraits of young Russians. At 10pm (theatre 4) the film by young Czech director Adéla Komrzý Czech Journal: Teaching War will be screened, showing how militarism slowly and openly pervades the Czech society renewing the practice of military training and compulsory conscription to implement ethics and responsibility to the state.

The international competition evening screening will be Dina (10pm, theatre 3) by American directors Dan Sickles and Antonio Santini, the winner of best American documentary at Sundance Film Festival. The film follows Dina and Scott, who grew up in a world which doesn’t value their experiences, fell madly in love and are now facing the challenge of a life together.

Programme on Sunday, 4 March, includes The Best of Fest – all the award-winning films of this year’s ZagrebDox – and In Case You Missed It, giving audience another chance to enjoy the screening of select titles from different programme sections.