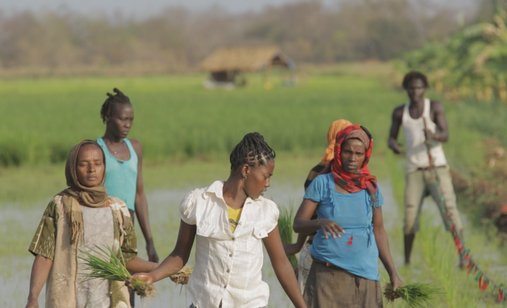 The fourth day of ZagrebDox starts early, at 10am (theatre 3), with the ZagrebDox Pro Pitching Forum: 12 project teams from 11 different countries will be presenting their documentary projects, developed at the workshop throughout the past four days, to an international panel of experts. Thursday features six Q&A sessions, after the screenings of: Dead Donkeys Fear No Hyenas (6pm, theatre 3), the latest film by Swedish director Joakim Demmer, an excellent example of investigative journalism about injustice in Ethiopia, a country exporting tons of food to the West but is barely able to feed its own population. Another topic it touches upon is why the World Bank spends billions of dollars on sustainable development aid, when at the same time millions of farmers cannot exploit their own land.

Other Q&A guest is Serbian director Mila Turajlić, presenting her film The Other Side of Everything (7pm, theatre 1), which earned her the best feature documentary award at IDFA and which focuses on the former and the current political regime in Serbia and the history of the filmmaker’s family. Another guest is Lithuanian director Arunas Matelis, who will discuss his film Wonderful Losers (8pm, theatre 1), portraying medical teams at Giro d’Italia, introducing us into the unknown world of cycling heroes who fall, rise again and press on.

Instead of Claude Lanzmann’s cancelled masterclass and in light of the large interest in the evening screening (theatre 2, 9pm), an additional screening of A Modern Man at theatre 2 at 5pm is scheduled, followed by aQ&A session with the director, Eva Mulvad, who painted a portrait of a successful classical violinist and Hugo Boss model, her rendition of a man in the contemporary world.

At 5pm the Musical Globe section features the multi award-winning film by the Californian director, journalist and three times Emmy winner Matt Schrader under the title Score: A Film Music Documentary. In the film he interviews over 50 renowned composers whose work indebted the film music industry, including: Hans Zimmer, John Williams, Rachel Portman, Patrick Doyle, Howard Shore, Quincy Jones, Alexandre Desplat etc. The film Napalm by French director Claude Lanzmann is scheduled for 7pm, theatre 2. He shot it in North Korea under the pretext of making a film on taekwondo, and in fact he retold the past, his own and the country’s.

ZagrebDox’s new programme section In Focus: New Europe on Thursday at 8pm and 9pm, theatres 4 and 5, screens two films. The first is Opera about Poland, directed by Piotr Stasik, an attempt to answer the question: Who are Polish people? At the Jihlava International Film Festival the film won the best Central and Eastern Europe documentary film award, and in Krakow it won a special mention. The second is Long Live Bulgaria by Bulgarian director Adela Peeva, focusing on the rise of nationalism in contemporary European Bulgaria, asking the question: Where to draw the line between patriotism and nationalism?

Evening screenings at 10pm, theatre 3, are two films from the Controversial Dox section and one State of Affairs entry. The first two are the short film Unspeakable by UK director Kate Stonehill, about the nature of freedom of speech, reflected on a situation in the British government that issues a statement appealing on universities to take a more active role in tackling extremism, and the film by Danish director Lars Feldballe-Petersen, Unforgiven, following the war criminal Esad Landzo who is trying to bring his life back to ‘normal’ after being convicted of a crime against humanity. State of affairs examined by the film Backpack Full of Cash, by Sarah Mondale, explores the issue of public school privatisation in the US, a topic which became a burning issue with the election of America’s new president. The film won the audience award at Philadelphia Film Festival.

The Retrospective section continues with Claire Simon’s films – at 4pm, theatre 3, her film Graduation will be screened, about the selection process of prospective students at the prestigious Parisian film school La Fémis. The film premiered at Mostra in Venice and won the Venezia Classici Award.