The popular Controversial Dox section this year questions the position of atheists in Croatia, specifics of public speech, global arms trade, different notions of the institution of ‘family’, as well as personal coping with disease. 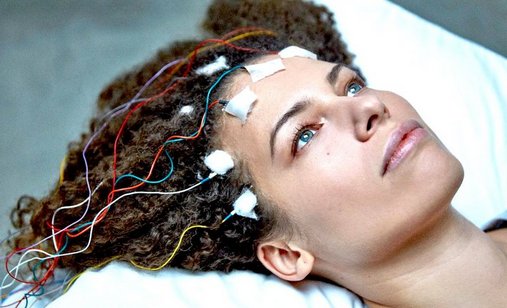 The popular Controversial Dox section this year again features outstanding titles focusing on controversial issues and occurrences in our daily lives. These intriguing subject matters, often addressed in an unconventional way, question the position of atheists in Croatia, specifics of public speech, global arms trade, different notions of the institution of ‘family’, as well as personal coping with disease and an unusual story about the president of the Free State of Liberland by the Danube.

Mary’s Black Sheep is a Croatian documentary by audiovisual artists Višnja Skorin and Kristina Baticeli, premiering at ZagrebDox. Kristina is an atheist who grew up in an extremely catholic environment, in the town of Marija Bistrica, the largest Croatian pilgrimage site. When she falls in love with a believer, she has to make a choice – will she be a hypocrite and marry in church or she will remain true to herself and thus hurt her loved ones.

American filmmaker Jennifer Brea noticed symptoms of fatigue and weakness at the age of 28. Since she couldn’t make doctors believe her, Brea started to record her thoughts, states and emotions with a camera. Bed-ridden, she enters the infinite space of worldwide web and discovers a community of people suffering from the same symptoms. Her condition is called myalgic encephalomyelitis, the so-called chronic fatigue syndrome. Brea’s debut film Unrest premiered in 2017 at Sundance and won a jury special mention for documentary film editing.

The film F.A.M.I.L.Y. is a personal inquest of the French-American director and photographer Jessica Champeaux into assisted reproductive treatment. To her, family consists of father, mother and children, but her sexual experience brought these roles into question. Since the Belgian law makes it possible for same sex couples to procreate thanks to ART, the author decided to make a research into the issues bothering her.

Laura Poitras is an extremely important name in investigative journalism. Her films have unmasked global political affairs and personalities: from the story of the most famous whistleblower Snowden, Citizenfour (Oscar, BAFTA), to My Country, My Country about the destinies of Iraqis under American occupation (Oscar nomination), to Risk about Julian Assange. In association with journalist and director Henrik Moltke, with Rami Malek and Michelle Williams as narrators and based on classified documents from the National Security Agency, the documentary Project X explores a mysterious journey from the National Business Park to a windowless central Manhattan high-rise.

Danish director Lars Feldballe-Petersen in his film The Unforgiven portrays Esad Landzo, a war criminal trying to ‘normalise’ his life after a conviction for a crime against humanity, In this dark and personal tale of evil, self-hatred and forgiveness, Esad is forced to face his victims and himself from the time he was a young man. The film was realised with the support of the HBO Adria Award for development it won at the ZagrebDox Pro workshop in 2015.

Global arms trade was in the spotlight of Belgian filmmaker Johan Grimonprez in Blue Orchids, from two opposite points of view. On one side is Chris Hedges, a former New York Times war reporter, and other is Riccardo Privitere, an arms dealer for the today closed company Talisman Europe Ltd. Interviewing them for the feature film Shadow World (2016), Grimonperez through their personal and political pasts gradually reveals the suffering and hypocrisy of the arms trade world.

Kate Stonehill, a London-based director with an unconventional and creative approach to political issues, presents her latest short film Unspeakable about the freedom of speech. In 2015 the British government issued a statement appealing to universities to take a more active role in fighting against extremism. They asked the attendees to implement a specific public speech and performance policy in order to prevent the expansion of radicalism among students. This hybrid documentary shows an complex and intense encounter with several such so-called British extremists.

German directing duo Monika Hielscher and Maththias Heeder have been making investigative documentaries for over 20 years, unmasking many relevant topics and issues burdening the contemporary society. In the frightening documentary Pre-Crime they delve deep into the 21st century security measures leaning on big data systems and computer algorithms as legal strategies around the world.

Call Him President is the feature debut by French filmmaker Marie-Emma Paoli, a story about Vito Jedlička, a 33-year.old political liberal from Czech Republic, who planted a flag in the wetlands near the Danube and called it the Free Republic of Liberland. Two years later, no one is living in Liberland anymore because the Croatian police puts anyone who wants to move there in prison. The film follows the adventures of the self-proclaimed president and his right hand, Vladan Jovanović, a mysterious war veteran from Serbia.