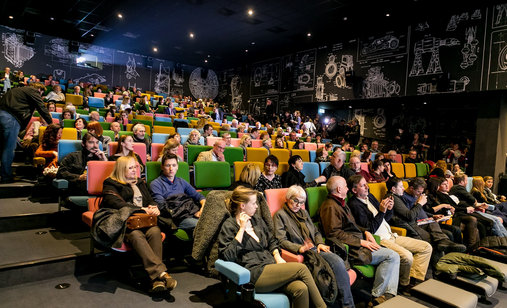 The festival is hosting over 120 names from the global and domestic documentary scene. Foreign filmmakers are led by Syrian director Talal Derki with the film Of Fathers and Sons, the winner of the best documentary film award at this year’s Sundance Film Festival, and the famous French documentary filmmaker, cinematographer, editor and actress Claire Simon, who is presenting her documentary work in a retrospective and an extended talk. Talal Derki will also have a masterclass at ZagrebDox Pro and speak about his unique approach to filmmaking, as well as emotional and practical consequences of filming in war zones, as well as films dealing with different aspects of war in the filmmaker’s country. Besides, on day two of the festival he will take part in an extended Q&A session after the screening of his film.

Other authors presenting their international competition films in person include Ziad Kalthoum, another Syrian director, speaking about his multi award-winning film Taste of Cement. Another author is Sophie Vučković, a Zagreb-born Swedish resident, presenting her film Chameleons, while Lithuanian director Arūnas Matelis will discuss his film Wonderful Losers: A Different World. Latvian director and winner of the jury special mention for debut film at IDFA Ieva Ozolina is presenting her film Solving My Mother, which she developed last year at the ZagrebDox Pro workshop.

Among the Croatian filmmakers visiting the festival this year are: Damian Nenadić with Days of Madness and Jadranka Cicvarić Šiftar and Senad Zemunović with Josipa, I Love You in regional competition, Bojana Burnać in the State of Affairs section presenting My Life without Air, Višnja Skorin and Katarina Baticeli in Controversial Dox with Mary’s Black Sheep, and the special programme In Focus: New Europe will discuss two films by Croatian filmmakers, Arijana Lekić-Fridrih (Begin Again) and Zdenko Jurilj (Home).

A famous name of Croatian documentary scene Boris Poljak will be presiding this year’s international jury, and he will acquaint audience with his creative work on an author’s evening. The ZagrebDoXXL platform will present Restart’s Documentary Film School in a conversation with the teachers and mentors Nebojša Slijepčević and Dinka Radonić, and students Maja Alibegović, Ante Zlatko Stolica and Jasmina Beširević. Among other filmmakers presenting their film works are: Sanja Bistričić, Ivan Šušnjar, Vladimira Spindler, Katarina Zlatec, Inesa Antić, Dražen Puklavec, Sonja Lazić, Tea Vidović, Marta Klepo and Lorna Kunčić.

The Biography Dox section will present Danish director Eva Mulvad. In addition to a Q&A session, at ZagrebDox Pro Eva Mulvad will present a case study about her latest documentary A Modern Man. In the State of Affairs section Swedish director Joakim Demmer will discuss his film Dead Donkeys Fear No Hyenas. Bosnian and Herzegovinian director Nedžad Begović is presenting his Happy Dox film Everywhere. Teen Dox is hosting two authors: Egyptian director Mohamed Siam (Amal) and Swedish director Mats Agren (The Making of a Politician), and this year’s new programme In Focus: New Europe is hosting the director of Licu, a Romanian Story, Anna Dumitrescu.