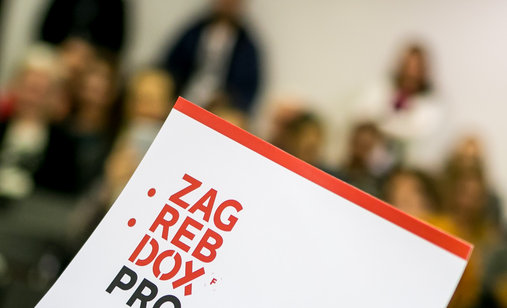 For the 13th edition of ZagrebDox Pro Leena Pasanen and Stefano Tealdi selected 12 projects from 12 countries at different stages of development and production. After four days of intense workshops, the Pitching Forum followed – the central event where the projects were presented to the members of an international panel consisting of film industry professionals, from sales agents to representatives of film funds, festivals, broadcasters and distributers. One-on-one meetings between project teams and panel members took place this morning, and this year's edition of ZagrebDox Pro ended at 8pm with an award ceremony.

The HBO Adria Award, a diploma and 2000 euro for project development went to the Hungarian project It's Her Story by two young directors, Asia Dér and Sára Haragonics, who presented the project along with producer Marcell Gerö. The award is given by Hanka Kastelicová, Vice-president and Executive Producer of Documentaries at HBO Europe, and presented by Marina Maslač, Regional Marketing Director at HBO Europe.

"The HBO Adria award goes to the project It's Her Story directed by Asia Der and Sara Haragonics, produced by Campfilm. It is an intimate insight into the life of Virag, who achieved everything professionally, but has to fight for the simplest right to choose her own way of living. This story deals with exclusion, changes in the understanding of what is family, and impact of politics on private lives. Those topics are very relevant in many European countries, so HBO Europe wants to support the development of this film."

The ZagrebDox Pro Online Mentor Award, a diploma and one-year online mentorship with Hanka Kastelicová, went to Moroccan director Merième Addou for Suspended Wives. This award is also given by Hanka Kastelicová.

"Choosing the project for tutoring was a pretty hard decision, as there were many great projects at this year's Zagreb Dox. I had discussions with several teams in order to find out, where my support would be most helpful. I have chosen to work with Merieme Addou on her project Suspended Wives. My goal is to support Merieme in finding the right dramaturgy and context, I believe that the fact that we are coming from different cultures might help to make a film universal."

Given the exceptional quality of this year's projects, the decision about the award presented by all the panel members – ZagrebDox Pro DCP, a diploma and DCP material after the project completion, was particularly demanding, so in this category two awards were given, to the projects The Lonely Battle of Thomas Redi and Speak So I Can See You.

The Lonely Battle of Thomas Reid is an Irish project in post-production, directed by Feargal Ward and Luke McManus, who use re-enactments to portray the fight of an 'ordinary' man Thomas Reid to keep his farm which Intel desires to buy at any cost. The project, and hopefully soon the film, is characterised by particular visual impressiveness, thanks to Feargal Ward who was also the DoP.

Speak So I Can See You is a project by the Serbian director and producer Marija Stojnić and producer Miloš Ivanović in final development. Extremely poetic shots position this project between observational documentary and sound experiment, focusing on the last Serbian radio station which still carries the weight of social criticism through the prism of high art in the culture and drama programming.

In addition, Sunday Lunch was awarded for best trailer and Bride In Search of Happiness for best progress during the training programme by workshop facilitators and mentors Leena Pasanen i Stefano Tealdi.