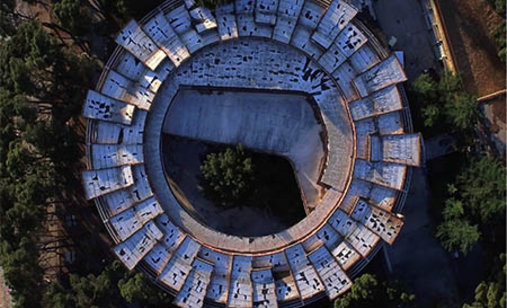 It has been said that architecture is at its most beautiful when in ruins. The remnants of history enchant with the brutality of bare spaces, the melancholy of decline. And yet, architecture that has lost its tenants has lost its original purpose, the reason for its existence. The series Slumbering Concrete tells the story of modern architecture in Croatia and the former Yugoslav region – an area singular among the vast number of abandoned and dilapidated 20th-century buildings of outstanding architectural value. Throughout four episodes (Socialism Meets Capitalism, Brief Encounters Along the Adriatic Highway, Mysterious Object in the Pine Forest, Megastructures) the series explores Croatian tourist architecture of the period, places where citizens of the West and the East could meet and put aside their differences in moments of leisure during the period of the Cold War and the rivalry between the Western and the Eastern Bloc. Each episode tells a dramatic story of the contradictions within socialist Yugoslav society positioned between the East and the West, democracy and totalitarianism, steeped in the utopian notion that architecture can make the world a better place.

Saša Ban (1978) holds a degree in Comparative Literature and Philosophy from the Faculty of Humanities and Social Sciences in Zagreb, as well as a degree in Film and TV Directing from the Academy of Dramatic Art. His short film Farewell (2003) and documentary Park (2004) have been shown at numerous festivals winning several awards. Almost all his films have been shown at film festivals in Croatia and abroad, and his short fiction film Interior, Apartment, Night received a Special Jury Mention at the Cottbus Film Festival in 2009. In 2006 Ban was a Young Jury member at ZagrebDox.