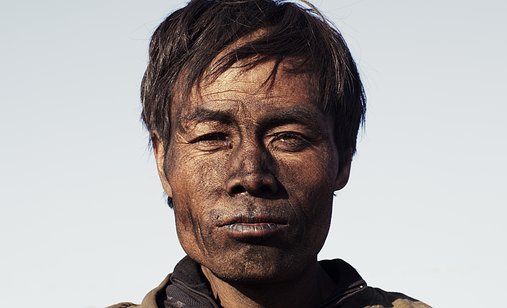 +
In modern times the vast mining industry has taken the monster’s place.

In the Old Testament, the mountains are the domain of a monster named Behemoth; in modern times the vast mining industry has taken the monster’s place. With a violent roar, the mountain spews iron ore and coal with infernal billowing smoke that leaves those working there struggling against fatigue and suffocation. The silence of the dreamlike Chinese landscapes is broken only by the thundering cacophony of explosions set to create a new entrance to the mine. The sheep farmers and their herds have been driven off the bright green pastures to make way for the ever-expanding mining industry; sick miners with ruined lungs are lying, dying, in the hospital. The “monster’s minions” have transformed a mountain paradise into an industrial zone surrounded by ghost towns of brand-new, deserted apartment blocks. Inspired by Dante’s Divine Comedy, director Liang Zhao shares in voice-over his poetic reflections on China’s search for a paradise, one that has ended up being something a lot more like hell.

Zhao Liang was born in Liaoning, China, in 1971. He graduated from Luxun Academy of Fine Arts in 1992. Based in Beijing since 1993, he has been working as an independent documentary filmmaker as well as an artist in photography and video art. His films Behemoth (2015), Together (2011), Petition (2009), Crime and Punishment (2007) and Paper Airplane (2001) have been selected and screened in Cannes, Venice, Berlin and other prestigious film festivals worldwide. With Petition, he won the Big Stamp (International Competition) Award at ZagrebDox 2010.