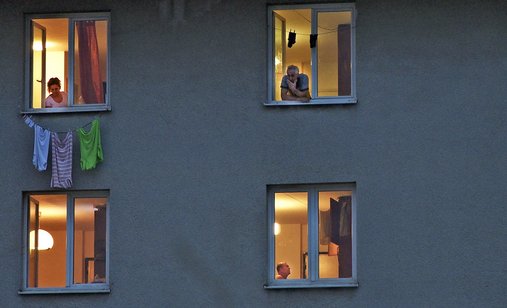 +
A five-storey building with three entrances, originally built as a temporary workers home is now shared by nineteen owners.

As a result of the privatization process, a five-storey building with three entrances, originally built as a temporary workers home mainly for guest construction workers from Bosnia, is now shared by nineteen owners. Men that live there, came to Slovenia as young lads and spent 30 years working on various construction sites throughout Slovenia. When the construction companies they worked for went bankrupt, they lost everything, and their bankrupt employers owe them lot of money. The first floor is occupied by adolescents who come from disturbed families and prefer the welfare youth home. A few tenants found refuge here in this cheapest accommodation facility, because they had been evicted from their former apartments. The house is large, but for most of its residents the accommodation here means that they have just a bed and not much else. Nobody calls it a home; they all thought it would be just a temporary solution, but sometimes this temporariness drags on endlessly. Besides social marginalization they have something else in common: stories.