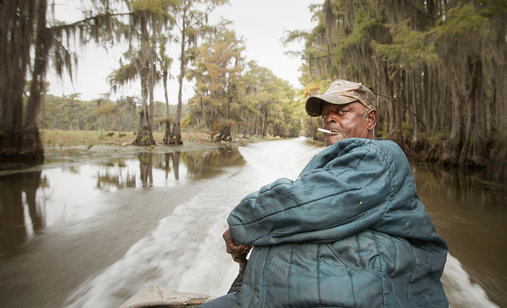 +
A sentimental and powerful portrait that is sure to put this town on the map.

The town of Uncertain lies on the Texas and Louisiana border, and is a quiet escape for many people looking to start a new life. In Ewan McNicol and Anna Sandilands’ beautifully filmed documentary the lives of several Uncertain citizens are examined, chronicling their ups and downs, their history, and their hesitant steps toward the future. We follow Zach, a 20-something diabetic who has been living in a completely trashed house after Child Protective Services took his mother away. He occupies his time playing video games, lamenting about the lack of young girls in Uncertain, and drinking at the local pub – but dreams of moving to Austin and getting a real job. Another man, Wayne, lives in recovery with his girlfriend and dachshund Molly. After several stints in jail for theft and even accidental homicide, Wayne spends his time hunting, looking for the enigmatic Mr. Ed, a hog with the head of a horse, and trying to rebuild a healthy life for himself. Finally we have Henry, an elderly local fisherman who has spent his entire life in Uncertain and has stories upon stories of lost love, terrible injustices, and dear friendships. Uncertain, filmed over the span of two years and boasting some incredible cinematography, is a sentimental and powerful portrait that is sure to put this town on the map.