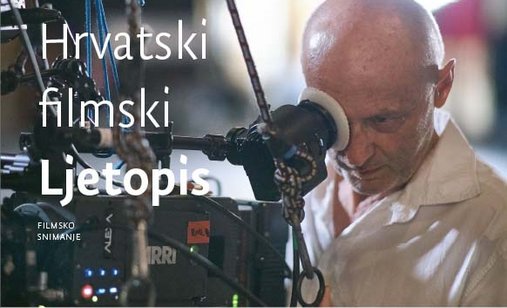 Speakers are Dinka Radonić and Arsen Oremović, authors of the texts, and editor in chief Nikica Gilić.

Hrvatski filmski ljetopis is the oldest Croatian journal about film that has for more than 20 years been publishing articles about all aspects of film art with knowledge and passion. Its winter issue (84) Ljetopis features a theme spread on cinematography, in association with the guest editor, professional cinematographer and photographer Jasenko Rasol. Professional cinematographer Dragan Marković writes about the making of The Living and the Dead (which earned him and Mirko Pivčević the Golden Arena at Pula Film Festival) and creative and practical solutions he had to apply. Dinka Radonić and Maja Midžor analyse the famous director-cinematographer duos Godard-Coutard and Bergman-Nykvist, but also about the history of broad use of light in fiction film. Next to a spread on cinematography, Hrvatski filmski ljetopis features reports from local film festivals, cinema release reviews and many other interesting and instructive articles on film.