Following a working week spent at ZagrebDox Pro and yesterday’s pitching forum, the participants were presented with awards on Friday. Out of a total of 12 selected international documentary projects, four of them garnered five awards. 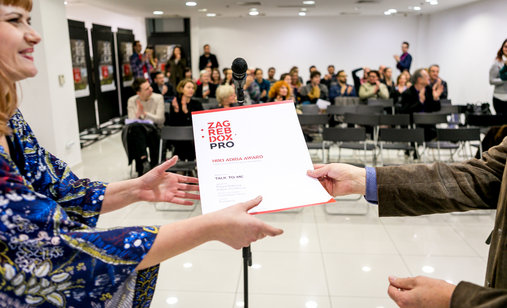 The HBO Adria award, including 2000 € for project development, went to the project Talk to Me by Petya Nakova and Katya Trichkova from Bulgaria. It was given to them by Marina Maslać of HBO Adria.

International co-production market DOK Leipzig award, a direct admission to the market, went to the project When the War comes by Jan Gebert, Radovan Sibirt and Viktória Hozzova from the Czech Republic, presented to them by Leena Pasanen.

Two industry passes for the Jihlava International Documentary Film festival went to the project My Marish by Bernadett Tuza-Ritter and Julianne Ugrin from Hungary.

The mentors decided to honour another project with an award, the Excellence Hat, for the project that made best progress. It went to Gabriel Babsi and his project The New Odyssesy.