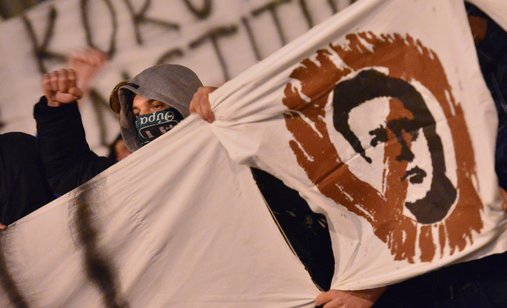 On Tuesday, regional competition at 18:00, theatre 2, screens Abdul and Hamza by Marko Grba Singh, a minimalist documentary about two young Somali migrants finding a temporary shelter in the mountains on the Romanian-Serbian border. The same selection includes Islands of Forgotten Cinemas, with the participation of director Ivan Ramljak, a documentary tale about the history of cinema on Croatian islands, told through the eyes of people related to island cinemas. They remember their first films, favourite titles and different events in cinemas on the islands.

At 19:00, theatre 1, two Croatian documentaries premiere. The film Tonight by Zdravko Mustać, belonging to the fourth generation of the Split school of alternative film, takes us to the streets of Zagreb ny noght, followed by the premiere of Arsen Oremović’s Third Best, about football and exploitation of athletic events to draw attention away from the current difficult economic situation.

At 21:00, theatre 3 hosts two Happy Dox about family. The Cutting by Katerina Duda is a joint project of the director and her grandfather, who spends his golden years discovering the joys of filmmaking, while Daddy’s Girl is a humorous film, full of love and petty bickering and kicks below the waist, about a single dad, a Finnish doctor of Turkish origin, and his daughter. After the screening, there will be a Q&A with the Finnish documentary author Melisa Üneri.

Lovers of classical music should not miss Erbarme dich – Matthäus Passion Stories in the Musical Globe section, a narrative labyrinth where celebrities like Peter Sellars, Emio Greco, Simon Halsey and painter Rinke Nijburg describe their special bond with Bach’s Matthäus Passion. After the screening, scheduled for 18:00, theatre 4, there will be a Q&A with Ramon Gieling. At the same time, the theatre next door, theatre 5, is screening Ice and the Sky, a biography of Claude Lorius, 82-year-old French glaciologist, known for his studies of paleoatmosphere  in ice cores.

British director Katherine Round will personally present her film The Divide, personal stories of several Americans – from a KFC saleswoman to a psychologist working with Wall Street bankers – shedding light on class differences and their mechanisms. Teen Dox at 17:00, theatre 1, screens Bite Size, a film about young Americans’ eating habits, among which every third child is obese, and A Girls Day, personally presented by director Rosa Hannah Ziegler. The current Oscar nominee in the best documentary film category, Cartel Land, is scheduled for 20:00, theatre 4.