Masterclasses by distinguished directors, workshops for creative documentary projects at different stages of development, a pitching forum, 4K technology presentation, discussions and one-on-one meetings are only a few of this year’s ZagrebDox Pro interesting events. 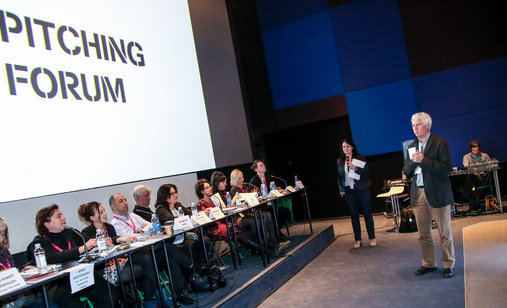 The central event – the pitching forum – is scheduled for Friday, 25 February (theatre 5, Cineplexx Kaptol Centre) and the next day there will be an open discussion on the future of creative documentary. A presentation of the transregional initiative for co-development of audiovisual projects and stimulation of international co-productions, RE-ACT, is also announced.

On Monday, 22 February at 6pm, John Appel is giving a masterclass. He has directed over 40 films and made a name for himself with his personal style close to protagonists. The msterclass is dedicated to crucial ethical dilemma in the process of editing, and as an introduction, his latest film, The Magic of Editing will be screened.

A specialist in aerial photography, director and environmentalist Yann Arthus-Bertrand, whose spectacular documentary Human is part of the 12th ZagrebDox international competition, is giving a masterclass on Wednesday, 24 February at 6.30pm.

One of the finest Swedish documentarians Erik Gandini is giving a masterclass on Thursday, 25 February, at 5pm. This year’s ZagrebDox is hosting a retrospective of his films and international competition is screening his acclaimed titles Swedish Theory of Love.

On Friday, 26 February, at 5pm, a masterclass by Georgian director Nino Kirtadzé takes place, called Cinema in Documentaries – How Does It Work.

As a continuation of the successful collaboration with ZagrebDox, Sony, in association with AVC, is presenting its cutting-edge equipment on Tuesday, 23 February, at 6.30pm. A leading specialist in 4K technology Sebastian Leske is presenting some of the elements in the production post-production chain called 4K Technology in TV and Film Content Production.

Hans Robert Eisenhauer, the mentor of the documentary project Solenazara by Pascal and Stephan Regoli – who won the mentorship last year as the award for best ZagrebDox Pro project 2015 – on Friday, 26 February, at 7pm, is speaking about his work on project development and mentorship, alongside director Stephan Regoli.

The Pitching Forum, the central ZagrebDox Pro event, is scheduled for Thursday, 25 February at 10pm, Cineplexx Kaptol Centre theatre 5. The forum will be open to the public and will present 12 chosen projects at different stages of development from nine countries. After a three-day preparatory workshop, the participants will present their projects to a panel of commissioning editors, film fund representatives, distributers and producers.

On Friday, 26 February, at 3pm, a discussion To Doc or Not to Doc – Is There a Future for Creative Documentary?, organised in association with Creative Europe Desk – MEDIA Office is taking place. Alongside significant cuts in public television budgets and new platforms and distribution models, the discussion will focus on identifying, understanding, accepting and changing these models. The panellists are: Ryan Harrington (Discovery Communications), Claire Aquilar (Sheffield Doc/Fest), Hanka Kastelicová (HBO Europe), Catherine Le Clef (CAT&Docs), Leena Pasanen (DOK Leipzig), Hrvoje Hribar (Croatian Audiovisual Centre), Sanja Ravlić (Croatian representative at Eurimages) and others.