Two films on today’s schedule in regional competition focus on the transitional reality of post-communist countries in a witty and humorous way. What is it like in Bulgaria? What is it like in Hungary? Check out in And the Party Goes On and On and A Train to Adulthood. 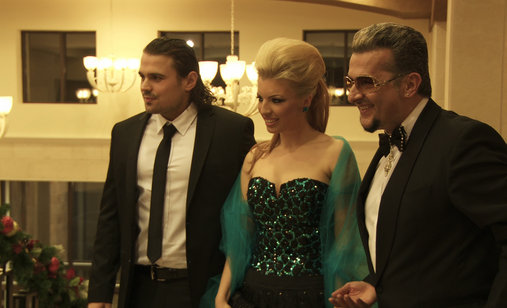 Bulgaria, an EU member state, is a country of political charades in which a bulgy bodyguard becomes a distinguished MP, in which the Roma are completely oppressed and marginalised, but one gay transgender Roma becomes a national celebrity, and the only thing thriving is corruption. And the Party Goes On and On is a witty film painting a picture of political hysteria in a country where the American dream is deeply ingrained in the collective psyche, whose manifestations turn into a common transitional and capitalist nightmare. The screening at 9pm, theatre 1, will be attended by the director, Gueorgui Balabanov, the famous Bulgarian director and writer.

Selling tickets or sending off trains used to be the dream of every boy (and many girls) from Leipzig to Vladivostok. Twins Viktor and Karmen from Budapest and their friend Gergö operate outdated shunts, leverages and phones, stand in a line for a celebration with flags and sing old songs around a camp fire. What could be an exercise in pathetic and false nostalgia becomes a subtle, sensitive and in no way happy coming-of-age story. The three of them on the verge of growing up need to take responsibilities and at an early age they face cruel capitalist reality. Director Klára Trencsényi in the film Train to Adulthood portrays the world in which a memory of the past is the only thing offering safety on the road to future, because there is no institution that could guarantee it. The screening at 6pm, theatre 5, will be attended by the director, Klára Trencsényi.