A caravan of bikes in the city centre announces the film Bikes Vs. Cars. Meeting the man who directed a documentary on the controversies in the famous Russian ballet company. A discussion on the future of creative documentary. 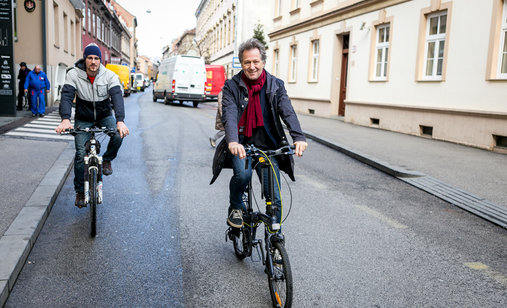 On Friday, ZagrebDox is preparing a special event: a caravan of bicycles as an introduction into Fredrik Gertten’s film Bikes Vs. Cars. In association with the Cyclists Union, the caravan, including 20 advocates of two-wheel transportation, together with the director, will ride through the city centre, just like what the director organised already in Brooklyn and Toronto, directly referring to the film’s subject – contemporary transportation issues. The caravan will begin in the rush hour.

Bikes Vs. Cars is scheduled for 6pm, theatre 4, followed by a Q&A session with the filmmaker and Tomislav Nakić-Alfirović from the Cyclists Union, moderated by Mima Simić.

Two Croatian short films premiere on Friday in regional competition: Clerical Error by Tin Bačun, whose making was ‘provoked by the system’ (theatre 5, 6pm), and Roommates by Katarina Zlatec and Ante Zlatko Stolica, a film about the Croatian precariat (theatre 5, 8pm). Another premiere is that of a Facumentary Generation ’68 by Nenad Puhovski, a tribute to the revolutionary revolution (theatre 3, 7pm). A Q&A session will follow after the films.

An author’s night will be dedicated to this year’s president of the international jury, Bruno Gamulin, featuring his films The Head, A Number out of Light, Consecration of the Place and Euclidean Landscape. The director will attend a Q&A session after the screening (theatre 1, 7pm).

Today’s line-up also includes Teen Doxes Hair by Selina Håkansson, and The Mask You Live In by Jennifer Siebel Newsom at 5pm, theatre 1. At 6pm, theatre 2 will screen the Russian film playing with the idea of a quantum man, Strange Particles by Denis Klebleev. At 8pm, theatre 2 is screening the controversial doc Travelling Light by Conxi Fornieles, and at 10pm, there is Monty Python: The Meaning of Life by Roger Graef and James Rogan.

At 5pm, a masterclass by director Nino Kirtadzéis scheduled. She will look back on three films from her retrospective and present visual elements from the process of making.

Photo: Fredrik Gertten sat on a bike as soon as he came to Zagreb, and our photographer Julien Duval clicked immediately.