One of the most burning current affairs in 2015 is the topic of this year’s ZagrebDox line-up in several ways: from an asylum seeker gourmet project, to growing up on a giant river barge, to screenings of films made in refugee camps in Jordan and Syria. 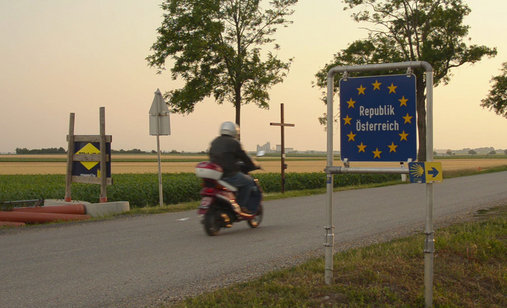 Croatian director Martina Globočnik made the film A Taste of Home, inspired by the namesake project helping asylum seekers to adapt to life in Croatian. Krisztina Meggyes in Those registered the changes a refugee camp caused in a small Hungarian town. Abdul and Hamza by Marko Grb Singh collected the life worries and feeling of not belonging shared by thousands of African and Middle Eastern refugees. Vladimir Tomić reflected on his own growing up on a giant ship called Flotel Europa, where the Copenhagen Red Cross housed countless refugees from war-torn Bosnia and Herzegovina. In a special programme Children Changing the World we will be watching a series of short films made at film workshops in refugee camps in Jordan and Austria.

The project A Taste of Home, which helps asylum seekers to integrate faster through cooking, but also to locals acquire new skills, make new friendships and gain knowledge of other cultures, inspired director Martina Globočnik to explore refugees and their experiences. We meet three protagonists: Emina, who turns her helping the asylum seekers into a cooking project, asylum seeker and chef Reda who is waiting for the decision of his destiny in Hotel Porin, and Sandra who escaped from Syria and is now trying to find her place under the sun.

The film Those by Krisztina Meggyes, also in the State of Affairs programme, turns her camera to Vámosszabadi, a Hungarian town near the Austrian border. Near this peaceful and uneventful town a refugee camp was established and the citizens responded harshly. Among other things, there is an activist group which decided to do whatever it takes to get rid of the migrants. However, the situation shed light on another, hidden conflict: the one between the new, wealthier citizens, who advocate for the camp to be moved, and the older, autochthonous population who accepted the presence of refugees.

The film Abdul and Hamza by Marko Grb Singh (regional competition) follows two young Somali refugees on their way to a better future, who found refuge in an abandoned house in the mountains near the Serbian-Romanian border. The film won a special mention at FIDMarseille 2015.

Regional competition also features the award-winning Flotel Europa by Vladimir Tomić, also the winner of the Tagesspiel Reader Award, Berlinale 2015 jury’s special Peace Prize, a jury special mention at Sarajevo Film Festival and the best Balkan documentary film at Dokufest. In 1992 a refugee surge from war-torn Bosnia and Herzegovina arrived in Denmark. The refugee camps were already packed so the Red Cross sent them to a large ship called Flotel Europa. There was also 12-year-old Vladimir, who escaped Sarajevo with his mother and older brother. Two decades later, the director recounts his growing up on the boat filled with echoes of war.

The special programme Children Changing the World includes a screening of films made at filmmaking workshops in refugee camps in Jordan and Austria. In Jordan young people who left their homes in Syria because of the war were taught how to use different media to register daily life at their new homes. At the same time, in Austria the aim was bring together a group of filmmakers and young people, also refugees, who found themselves in this country without parents. To almost all the participants the workshop was the first encounter with a camera, and months of work resulted in a series of expressionist videos.

After the film screenings, a panel on migrations will gather Sepp Bruderman (Vienna), refugees workshop mentor, Ranko Ostojić, former minister of the interior, and Luka Juranić, founder of the association Are You Syrious?, with Milena Zajović as moderator.