This year’s Controversial Dox category features nine intriguing titles focusing on some of the greatest controversies of today, from green banking and recruiting jihadists, to homeless children and paedophilia. One of the films portrays a local controversy – the war story of a Croatian soldier whose moral act of saving cultural goods turned into many years of punishment. 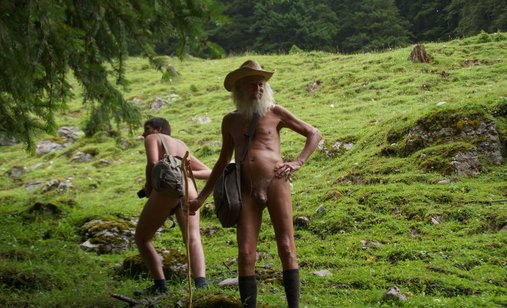 A worrying diagnosis of the conditions on our planet comes from the provocative French documentary Banking Nature by Denis Delestrac and Sandrine Feydel. In this exploratory documentary they delve into the wondrous world of green banking in which investors buy endangered species habitat to sell them as shares. Opposite alienated industrials and bankers are people so in harmony with nature that every minute they wish to feel it on their skin. Scottish filmmaker Conxi Fornieles’s Travelling Light introduces us to veteran nudists on a group hike in the Austrian Alps.

Several documentaries tackle the controversial issues through personal testimonies of individuals. Combining archive footage and interview with the protagonist, the film To Be or Not to Be Ivan Hiti by Bosnian and Herzegovinian director Branko Lazić sheds light on the events dating back to the wartime 1992, when the then Croatian soldier Ivan Hiti refused to obey the order to burn the oldest and largest Serbian Orthodox Church library in Croatia, for which he was called a traitor and dishonourably discharged. The outstanding Norwegian documentary Jihad – A Story of Others by Deeyah Khan features several highly ranked jihadi soldiers who reveal what drew them to the world and how they got out of it, and the Dutch Among Us by Guido Hendrikx takes us to the world of three Dutch paedophiles, revealing how these highly educated and confident men cope with their morbid inclinations.

Two documentaries tackle controversies coming from former USSR countries. The film Credit for Murder by Israeli director Vladi Antonevicz was inspired by a shocking 2007 YouTube video showing a group of Russian neo-Nazis killing two boys. Antonevicz decided to investigate the case, which in time turned into a private obsession and the investigation took six years.

The American documentary Crocodile Gennadiy takes us to Ukraine, where we follow Gennadiy Mikhnenko, a controversial pastor from Mariupol, whose controversial methods fight against homelessness among children. The film was directed by Steve Hoover, known for his winning documentary at Sundance 2013, Blood Brother. Terrence Malick was one of the executive producers.

What would happen if aliens came to our planet? How would we act? Would we be afraid? These and similar questions are in the focus of The Visit: An Alien Encouter by Danish documentary filmmaker Michael Madsen. The entertaining cinematic simulation of this hypothetical encounter features many specialists in space issues with the UN, NASA and the British government.

The short film Figure by Polish author Katarzyna Gondek speaks about the inhabitant of the largest sacred miniature park in the world, John Paul II made out of plastic and fiberglass, criticising mythmaking, religious kitsch and striving for grandeur.