… each unhappy family is unhappy in its own way. Family matters are an endless source of inspiration, especially when it comes to one’s own family. This goes for at least ten films from the 12th ZagrebDox programme which focused precisely on this – one’s own familes. 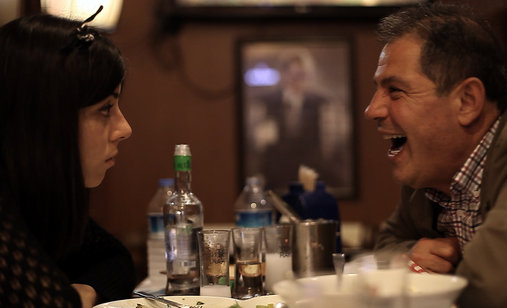 In international competition three filmmakers peeped through their own keyhole.

Lena Macdonald, the director of Mom and Me, filmed her complex relationship with her mother who ended up a crack addict living on the street. For ten years Lena was trying to save her mother from herself, following her with a camera along the cold and harsh streets of poor Toronto neighbourhoods.

An important role in her own film was played by Karen Guthrie, who directed the documentary film The Closer We Get, the winner of Hot Docs 2015. Karen returned home after her mother had suffered a stroke, as well as her prodigal father, who had left years ago. The family suddenly gathered and gave the director one last chance to renew the relationships and come to terms with unsettled matters.

Sylvain Biegeleisen, the director of Twilight of a Life, also got a last chance when his 94-year-old mother was said she had only a few weeks left. The forecast was wrong and the director made a film full of humour, emotions and optimism.

The documentary Thank You for Playing by David Osit and Malika Zouhali-Worrall, also in international competition, took a look at someone else’s family – that of designer Ryan Green. When his son was diagnosed with terminal cancer, Green committed to making a videogame about this painful experience.

Regional competition directors also took a peep over the thresholds. Fatima Bianchi, the director of Tyndall, filmed her family members as voluntary prisoners of their own internal monologues.

Igor Bogdanović in his Lila registers the complex relationship between three people, additionally intensified in the process of expecting baby girl Lila.

A coming-of-age story is the one told by Melisa Üneri, the director of Daddy’s Girl from the Happy Dox section. The film focuses on Melisa and her father Cengiz, whose relationship began to falter when the director moved to Turkey to live a life of her own. Cengiz did not know how to cope with her emancipation, which launched a series of tragicomic events.

Another film of the sort is Given in Exchange by Sofia Geweiler in our programme The Russians Are Coming. The film portrays several mother who shared their experiences of ‘the greatest event in life’ with the audience.