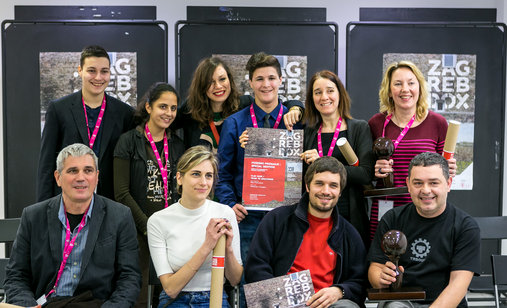 Poet on a Business Trip (directed by Ju Anqi)

This poetic, provocative, and beautiful film is awarded for its power and for its skill in connecting the unexpected social truths with exciting presentation of art and of personal issues. Poet on a business trip reminds us how very hard it is to maintain the focused, monographical approach to documentarism, and at the same time to venture very convincingly into the areas of social mores and rules of the areas usually hidden from the international (and probably even Chinese) cinema audiences. Brave in its complex form, visually original and fascinating, Ju Anqi's film offers a very original artistic vision, still capable, after all the experiments taking place in cinema in recent decades, of expanding the way we think of documentary cinema.

Chad Gracia's film presents an innovative approach to political and personal issues, a new way to deal with the emotionally highly charged political past and present of the Ukrainian society. History can often be described as a series of traumatic events, so this film documents one artist's attempt to process the trauma through his work. However, the investigation made by the film's unlikely but affable hero, as well as the and political turmoil, turn the quest for truth into a completely different direction, making this movie even more intriguing and complex, challenging for the filmmaker, the film's protagonists and the viewers.

Moving in its depiction of human destiny, Tell Spring Not to Come This Year shows a remarkable capacity to enter into the heart of fascinating events. While it would not be easy even to follow the sequence of events taking place in the Afghanistan's confusing warfront (unfathomable for the American forces that decided to slowly withdraw), this film succeeds to present the most poignant and dramatic events in a very convincing way. Fighting between different political and religious factions (sometimes completely undiscernible even to the protagonists who fight in that war) is presented in impressive documentarist terms, skilfully indicating ways in which personal drama and action-packed events point towards understanding general situation in a very complex and heavily wounded country.

For its compelling portrait of an ex-alcoholic who is on the road to recovery, for its elaborate structure and innovative, economic editing, and for engaging the audience with a simple film about an ordinary man full of surprise twists and revelations, the jury awards the Big Stamp award for the best film to 4.7 by Duro Gavran.

For its deeply personal point of view seen through home movie footage, for its perspective of the life of a refugee on a floating 'hotel', and for a wonderful coming-of-age story of a Danish-Bosnian young man, the jury would like to honor Flotel Europa by Vladimir Tomić with a Special Mention.

For its strong cinematic vision, for its sensibility shown towards its characters and for the unique moment it is able to catch – the moment when life shifts from one stage to the next and a child leaves behind his innocence and enters a harsher universe, the jury would like to honour Train to Adulthood by Klára Trencsényi with a Special Mention.

Little Stamp
for best author under 35 years of age

Above and Below (director: Nicolas Steiner)

This enigmatic film allows the viewer to slow down and emerge into the life of several characters on the periphery of society who, in their seemingly lost and aimless lives, succeed in finding fascination, beauty and love.

The jury gives a special mention to a film which enters the life of two Somali refugees in Serbia in a gentle and melancholic way, showing how they slowly disappear in an unfamiliar world. The special mention goes to Abdul and Hamza.

A bold piece of filmmaking which manages to portray a subtle, often elusive state of mind, as well as the abstract idea of a generational identity crisis in a surprisingly precise manner. Its confidence and originality announces the arrival of a talented young author with a strong sense of style and a fresh understanding of her surroundings.

The award in the Movies That Matter category goes to the film My Aleppo for his authentic portrayal of a war-stricken family. The film is technically well structured and does not make the audience cry but rather motivates them to understand. A family living in a new environment, accepting it without a fear of poverty, although far away from the war, still mentally experiences the war via virtual communication with the rest of the family. The film also depicts the state of mind of the family who remained in Syria and who make fatal decisions under the pressure of the environment and the socio-economic state of war. The film portrays the daily life of a refugee family and challenges prejudices against refugees as individuals who wish to exploit other countries’ socio-economic systems. This family wants to go back and feels remorse over leaving other family members in order to save their own lives and the lives of their children. This films penetrates all the layers of the unbearable heaviness of refugee being in today’s world.

The honour the film Women in Sink with a Special Mention for its original portrayal of the relations between Arabs and Jews. Washing hair in a salon makes the protagonists bare their feelings, let go to spontaneity and honestly consider the situation in the community. The film creates a female bubble of different religions and ethnicities, offering solutions spontaneously. A special value of the film lies in the fact that the director also laid her emotions bare in the process, expressing her opinion on life in the community, while the reality proved to be completely different. Her idea led to real-life, authentic stories which would not have been told quite so easily in a different place.

At the very beginning of our deliberation, we agreed we would give one special mention to a film focusing on regional issues. Home addresses the matters of former Yugoslavia’s post-transitional societies: Bosnian and Slovenian. The film depicts the people deriving from humanity, reduced to slavery, and utterly humiliated. They do not react to everyday situations that are supposed to provide pleasure and enjoyment. The Orwellian dimension to the film accentuates the automatized individuals creating the system in an isolated reality. The system that denied workers as humans, who, despite their humiliation, still feel a close connection with the factories they used to work in.

The Teen Dox category award goes to the documentary film Landfill Harmonic by Graham Toensley and Brad Allgood. The film has an original and exciting focus, it is honest and authentic, with interesting and exceptional protagonists. They really make us feel part of the action. The film’s concept is brought to life with an outstanding portrayal of living conditions, conveying the message that it is not the conditions that matter, but the motivation and a wish for accomplishment.

My Generation Award
Awarded by the festival director, Nenad Puhovski

My Generation Award goes to the film Don Juan by Jerzy Sladkowski, for its skill to identify and document an everyday story about a person whom we are quick to judge for his lack of social skills in communication with so-called regular people, and for it turning an archetypal story of a narrow-minded system of fixed habits and mutual expectations. First of all, because of the humanity and open approach he uses force us to take a look inside, whether we take the side of the autistic young man, or of those who wish to cure him, we sincerely wish Oleg to win his own way. That is why Jerzy Sladkowski is a great master of (documentary) cinema.