From 21 to 28 February, at Cineplexx Kaptol Centre, ZagrebDox takes place for the 12th time, this year with more than 160 films in 17 categories. 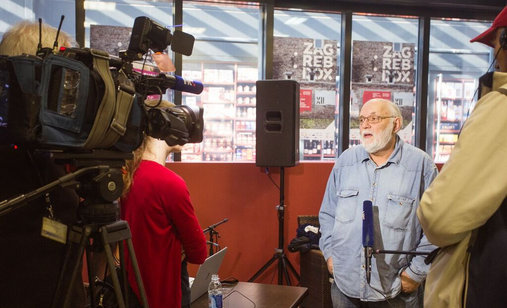 At the media conference on Wednesday at Kaptol Centre, the 12th ZagrebDox International Documentary Film Festival programme was presented. Between 21 and 28 of February, at Kaptol Centre, ZagrebDox will take place for the 12th time, this year with over 160 films in 17 categories, complete with many surprises and programme-related novelties, including a three-day warm-up programme Fall in Love with Documentaries (12-14 February).

ZagrebDox’s director Nenad Puhovski singled out several intriguing international competition titles: “Out of 24 titles that comprise this year’s International Competition, three intriguing titles will be presented to the audience both at the festival and in our warm-up programme, Fall in Love with Documentaries. These are the already announced Sundance winner Wolfpack, a spectacular documentary on mankind Human, director’s cut, and the South Korean box office hit My Love Don’t Cross That River.”

Among the films with prestigious nominations in International Competition is a current Oscar nominee for best documentary film and a BAFTA nominee Cartel Land by Matthew Heineman (TRAILER), The Russian Woodpecker by Chad Garcia (TRAILER), and the Dutch film about rising egocentrism in the western world, A Strange Love Affair with Ego, directed by Ester Gould, the winner in best Dutch documentary category at IDFA (TRAILER).

The Regional Competition includes a total of 27 films. The French-Bulgarian And the Party Goes On and On by Gueorgui Balabanov is a tragic comedy about modern Bulgarian society, as well as 12 Croatian documentaries. These are 4.7 by Đuro Gavran, Clerical Error by Tin Bačun, Roommates by Katarina Zlatec and Ante Zlatko Stolica, Candidate by Tomislav Pulić and Robert Tomić Zuber, Kino Otok by Ivan Ramljak, Short Family Film by Igor Bezinović, Lila by Igor Bogdanović, Noćas by Zdravko Mustać, Pravda by Nebojša Slijepčević, Sanja by Nikica Zdunić, Third Best by Arsen Oremović, and Turizam by Tonći Gaćina.

Special programmes this year showcase two intriguing novelties. Russians Are Coming features nine documentaries about contemporary Russia and former Soviet Union countries, and Children Changing the World comprises short documentaries made by refugee children who sought asylum in Austria and in a refugee camp in Jordan.

ZagrebDox is supported by City of Zagreb, Croatian Audiovisual Centre and Creative Europe – MEDIA Sub-programme. Croatian Telecom is the general sponsor of ZagrebDox for 11th time around.

Check out more detailed information in the press release.

A list of films to be screened at 12th ZagrebDox is also available.

Photographs from the media conference are in the gallery.