In a particularly cheerful mood, ZagrebDox opened the doors of four Cineplexx theatres at Kaptol Centre to all the lovers of documentary film and those who yet have to become ones. By next Sunday, 28 February, the festival will screen over 160 films in 17 programmes. 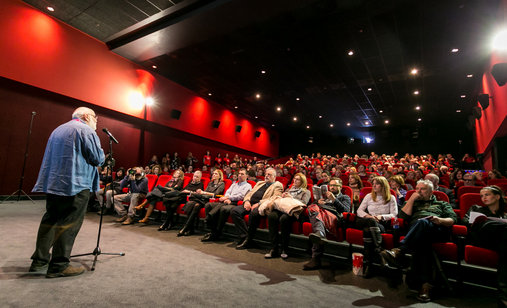 Ahead of the screening of The Closer We Get by British director and festival guest Karen Guthrie, ZagrebDox’s director Nenad Puhovski, and Croatian Audiovisual Centre’s managing director Hrvoje Hribar addressed the audience, as well as Zagreb’s mayor Milan Bandić, who officially opened the festival.

Nenad Puhovski remarked that the festival gets more and more visitors each year and that the atmosphere is getting better and better. There is also a growing number of films to watch. ‘Here at ZagrebDox we are trying to challenge uncertainties and our fragile knowledge, face what we think and what others think, broach subjects, create dialogues,’ he said and quoted Charles Bukowski, ‘The problem with the world is that the intelligent people are full of doubts, while the stupid ones are full of confidence.’

Hrvoje Hribar pointed out that filmmaking means leaving a trace, without which there would be no tradition, no international visibility or funds. ‘Documentary film is one perversely democratic situation in which truths and lies sometimes go hand in hand, and sometimes take it in turn, and all of us who like a documentary film like it because of this interplay between the truth and lies.’

Milan Bandić said that ZagrebDox has a dual purpose: to contribute to the position of Zagreb as a cultural and travel destination, but also to support education and tolerance. He then officially opened the festival.