Project In Search of a Lost Country Wins Award in Prizren

ZagrebDox Pitching Forum will be held on Friday, February 28 at 10am

DEADLINE FOR APPLICATIONS TO THE REALITY CHECK WORKSHOP AND PHONE DOX EXTENDED ! 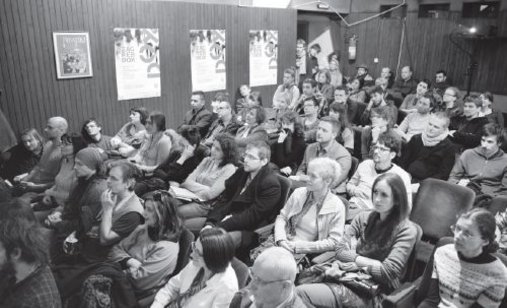 Each year ZagrebDox Pro invites a master of the art and craft of documentary filmmaking to share their ideas and methods with the audience craving to learn and be inspired. Every Masterclass is a unique event, hopefully an exquisite and memorable exchange of thought between the master and the audience. This year we are fortunate to have two intriguing and accomplished guests from different film professions.

Hans Robert Eisenhauer, the producer of Return to Homs from the International Competition of the 10th ZagrebDox will hold a lecture in the Zagreb Film Hall from 10.30am. Danish director Jon Bang Carlsen, whose film Just the Right Amount of Violence screened as part of the Controversial Dox program this year, will share his thoughts with the audience in the same place two hours later, starting from 12.30pm.

Hans Robert Eisenhauer's commissions include: Buena Vista Social Club, Oscar-winner Taxi to the Dark Side, Peabody-winner Why We Fight and Sundance winner The House I Live In. He has also served as head of the Berlin Film Fund. After his retirement from ZDF/ARTE, Hans Robert is living in Berlin and running the film and TV-production company Ventana-Film, focusing on international documentary films. His recent co-production Return to Homs has received the Grand Jury Prize for the best international documentary film at Sundance Film Festival 2014.

Jon Bang Carlsen has written and directed more than thirty films, both documentary and fiction. The director’s signature hybrid style combines documentary and fictional interpretations, and many of his documentaries are visually and symbolically powerful, often staged portraits of marginal figures and milieus. From 1977 onward, mise-en-scene with real characters plays a very important part in his productions, and this method is detailed in his meta-film, How to Invent Reality (1996). Jon Bang Carlsen says: ‘To me, documentaries are no more ‘real’ than fiction films and fiction films are no more fabulation than documentaries. There is no ‘reality’ that cannot be seen from a diff erent angle and be revealed as a dream. To describe the world, you have to define the truth in a way that does not exclude lies.’