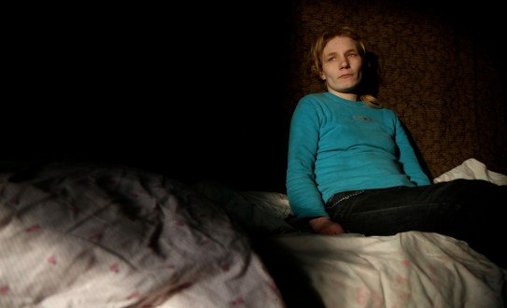 +
Zanda is waiting for her brother Valdis, also the father of their children, to come back from prison...

‘I believe this will be a film about me, about Valdis and our children. Because I live with my brother and we have children.’ With this statement made by 28-year-old Zanda, the film Family Instinct begins, probably one of the most bizarre films ever shown at ZagrebDox. Zanda is waiting for her brother Valdis, also the father of their children, to come back from prison. Zanda’s potential lovers, relatives and neighbours spend their daily lives drinking beer (out of inevitable plastic bottles), with weird bursts of uncontrolled emotions, in a village of utterly unusual standards. Even though the film begins with a classic documentary statement, its form is all but classic. The extremely good balance between documentary and fiction draws the viewer in the atmosphere and the carefully planned plot, told through apparently acted and re-enacted scenes, engulfing him in a series of dilemmas related to the ethics of even making such a film. Let’s see Family Instinct in the name of all families.

Andris Gauja was born in 1978, Latvia. He studied theatre, film and television screenwriting in Latvian Academy of Culture, and has worked as a television and press journalist, learned playing flute in Jazepa Medina Music School and is still playing music. Gauja is an up-and-coming film director with a special knack for finding unusual subjects and characters. His previous films, mostly on ethical and social issues, have been very popular with TV and film audiences. ‘Family Instinct’ the director’s third documentary film.