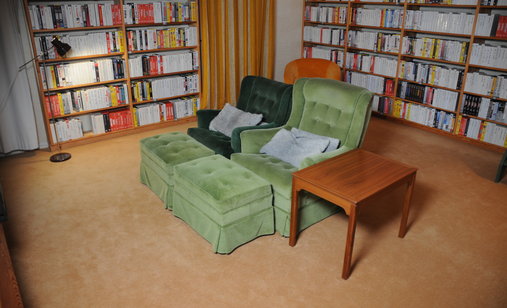 +
The documentary "Trespassing Bergman” takes us to Ingmar Bergman’s mystical home on the island of Fårö in the company of great directors. The documentary tells the story of the grat director, his island and some of his most important films.

In the mid 1960s Swedish director Ingmar Bergman built a house on the remote island of Fårö in the Baltic Sea. Throughout his life, the exact location of the house was a well-guarded secret. Here Bergman would live and shoot some of his seminal films until his death in 2007. In Trespassing Bergman the audience is taken to the house together with directors such as Alejandro González Iñárritu, Claire Denis, Michael Haneke and others, to tell the story of Ingmar Bergman, his island and some of his most central films. With previously unseen footage from the making of Bergman’s films and interviews with directors and actors shot at Fårö, and all around the world. Filmmakers such as Ang Lee, Isabella Rossellini, Harriet Andersson, Zhang Yimou, Woody Allen, Laura Dern, Francis Ford Coppola, Takeshi Kitano, Holly Hunter, Wes Anderson, Robert De Niro, Martin Scorsese, Lars von Trier, Ridley Scott and many more offer a fresh and intimate perspective on the life and work of Ingmar Bergman.

Jane Magnusson is a Swedish journalist, screenwriter, director and film critic for the Daily News. Magnusson has written and directed awarded documentary Ebbe – the movie (2009, together with Karin af Klintberg).

Hynek Pallas is freelance journalist and film editor of Bergman’s Video on SVT, director of the feature film documentary Trespassing Bergman. Writes about film and television on his blog Weird Science.