The official award ceremony last night at the Festival Centre closed the 10th edition of ZagrebDox. Do not miss today's Best of Fest programme which includes screenings of awarded films. 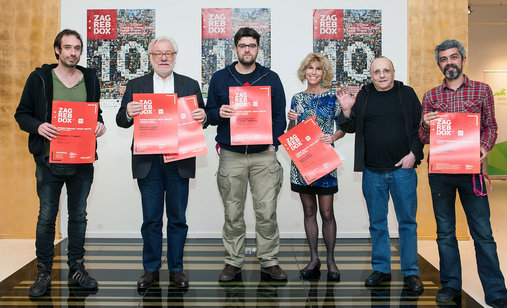 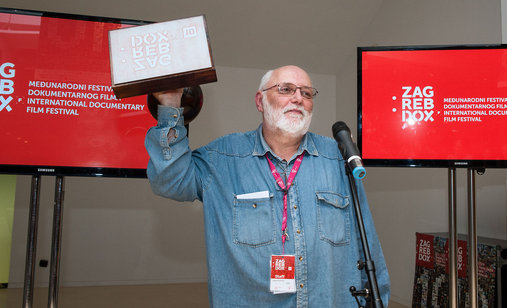 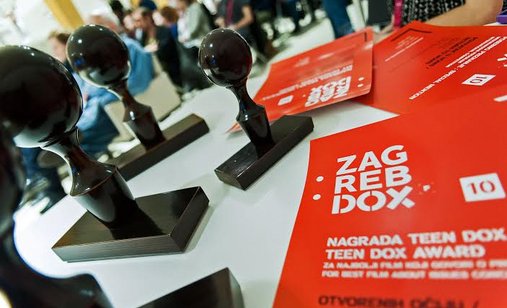 The official award ceremony tonight at the Festival Centre closed the 10th edition of ZagrebDox. At the very beginning the visitors were greeted by the festival director Nenad Puhovski and played them a film presenting an overview of this festival decade.

Then Puhovski presented the award he is giving since last year to the best filmmaker of his generation. This time the My Generation Award went to Marcel Łoziński for his film Father and Son on a Journey. “It is easy to be a child. Nor a young person. Carrying the traumas of the world we are growing up in, including those coming from the environment that is supposed to protect us – our own family. Cutting the motional umbilical cord is almost always difficult and painful. However, it is not easy to be a parent. Especially a father. Expectations are often greater than possibilities and knowledge about failed chances always arrive too late. Facing them, therefore, is almost always equally painful and hard. But there are hundreds of fiction and documentary films about the coming-of-age traumas, even an entire sub-genre, documentaries about the problems of parents, especially fathers, are few and far between. Therefore, the My Generation Award this year goes to the Polish documentary master Marcel Łoziński for his outstanding film Father and Son on a Journey, in which he honestly, gently and ruthlessly on himself analyses his relationship with his son, also a renowned documentarian, Pavel,” said Puhovski.

Phone Dox Award is given to the best film made by a cell-phone. The jury consisting of video artist Ana Hušman and directors Andrej Korovlljev and Tomislav Jelinčić decided on the Turkish film Living with Leviathan by Şirin Bahar Demirel. “Filmmaker Şirin Bahar Demirel compiled personal moments of the participants of the Turkish protests in an intimate and idiosyncratic way to sublimate the individual experiences in this turbulent historical moment. The public space of Istanbul's streets and squares through the personal lens of the protesters becomes a stage for small people's intimate dramas which, through actions and experiences, become part of the collective history,” said the jury in their explanation.

The best Teen Dox film, a film that best speaks about the problems of the young, was decided this year by the students of the First Private High School in Zagreb. Their choice was the Swedish film With Open Eyes by Erik Bäfving. “14 minutes, 20 persons and a child, the most complex emotions through the pure simplicity of photographs. This film touched and moved us, awoke the most beautiful, painful and sincere emotions in us, and hopefully you too. We believe everyone could identify with these beautiful 14 minutes. All of us at one point wondered: „Who am I really?“ they said in their explanation. The special mention went to the Spanish film Red Carpet by Manuel Fernández and Iosu López.

The Movies That Matter Award is given to the film that best promotes human rights, according to the opinion of the jury of professionals. This year it consisted of Sanja Sarnavka, president of the women’s association B.a.B.e., director Ed Moschitz, and Veton Kurkollari, DokuFest art director. Their choice was Pipeline by Vitaly Mansky. “By documenting lives of ordinary people living along one the biggest European projects, we are slowly faced with many of its paradoxes. Polluted rivers offering dead fish, strange golden statues reminiscent of communist era and widespread poverty on one side are interwoven with images of wealth on the other side. A line from the film superbly paraphrases the essence of this great piece of documentary filmmaking; “For countries in transition democracy means poverty.” Special Mentions in this category went to two films: the Croatian film The 4th Monkey by Hrvoje Mabić and the Syrian-German film Return to Homs by Talal Derki.

The official categories followed. The Small Stamp is given to the best film by a filmmaker below the age of 35. This year’s jury – Marcel Łoziński, director and head of the Documentary Department at Andrzej Wajda Film School, and directors Ivana Mladenović and Lidija Špegar – awarded the Small Stamp to The Special Need by Carlo Zoratti. “Special Need is a film in which the director managed to portray a piece of life of an autisticc person but without even a slightest touch of bad taste. With humour, easy-goingness and sensibility for the protagonist, it reveals the universal need of human beings – to be loved,” they said in their explanation. Special Mentions in this category went to the film Stories We Tell by Sarah Polley and Patio by Aly Muritiba.

The Big Stamp in regional competition went to the Italian film Sacro GRA by Gianfranco Rosi – at the discretion of the jury consisting of Charlie Phillips, deputy director at Sheffiled Doc/Fest, Ryan Harrington, head of the Documentary Department at Tribeca Film Institute, and Youlian Tabakov, director and last year’s Big Stamp winner in the same category. “This example of master filmmaking feels almost perfect, exploring how diverse parts of humanity deal with daily existence. Beautifully crafted, the filmmaking shows real skill - and the filmmaker's hand is always present, contemplative and humanising those on screen.” Special Mentions in this category went to the Bulgarian film A Life Almost Wonderful by Svetoslav Draganov and the Hungarian film Stream of Love by Ágnes Sós.

Finally, the best international competition film was decided by the jury consisting of Damir Čučić, director and producer, Jean-Pierre Rehm, director of FIDMarseille, and Josh Gibson, director and last year’s winner in this category. The Big Stamp went to the film the Last Station by Cristiano Soto and Catalina Vergara. “The jury is pleased to award the Zagreb Dox Big Stamp Award to The Last Station. In quiet dignity this film reveals the lives of those discarded by society and their families. But the elderly become not so much the subject as the metabolism of the film. The rhythms of their lives pulse through and render the filmic world.  Sounds are alchemized into forgotten memories. The jury would to congratulate the filmmakers for finding the nuanced frequency and pacing that permits us to experience the humanity at the end of life,” they said in their explanation. Special Mentions in this category went to the films Return to Homs by Talal Derki and Ne Me Quitte Pas by Niels van Koevorden and Sabine Lubbe Bakker.

At the very end of the ceremony the festival producer Lucija Parać and ZagrebDox Pro producer Tamara Babun awarded the biggest stamp to Nenad Puhovski. He thanked his closest collaborators for the award and said this festival could never work without more than 130 team members, most of whom are volunteers.