Of five nominees in the best documentary category, three are scheduled for this year’s festival sections, and one was shown last year in international competition. 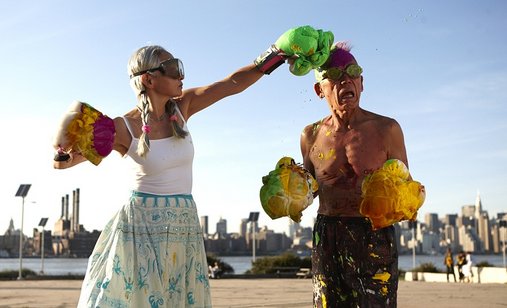 The American film Dirty Wars by director, cinematographer and editor Richard Rowley is part of international competition and follows investigative journalist Jeremy Scahill, the author of the international bestseller Blackwater, to the heart of American secret wars, from Afghanistan to Yemen, Somalia and further. Part political thriller, part detective story, this film brings one of the most important and least explored stories of our time. The film Dirty Wars has so far won a series of awards, including the F:ACT Award at CPH:DOX, best documentary at Warsaw Film Festival, and best camera at Sundance.

The Biography Dox section presents Cutie and the Boxer. This is a film based on art, partnership and the 40 years of love between Ushio and Noriko Shinohara, eccentric Japanese artists who met and got married in New York City in the early 1970s. Ushio’s sculptures brought him fame, but rarely money. Noriko – who gave up art to assist him – now finally goes out of her husband’s shadow and creates drawings that catch the public eye and cause Ushio’s jealousy. Debut director Zachary Heinzerling won the best director award at the last Sundance, and the film won the second audience award at Tribeca. TRAILER

Twenty Feet from Stardom is part of the Musical Globe section. Besides its chance to win an Oscar, the film has already garnered a dozen recognitions at international festivals. Director Morgan Neville puts in the spotlight the untold tales of the back vocals of some of the greatest music legends of the 21st century. The so far unsung heroes of great stages and their unique life stories are told through rare archive footage and intimate interviews with music greats: Bruce Springsteen, Stevie Wonder, Mick Jagger, Sting etc. Accompanied by an outstanding soundtrack!

The Act of Killing by Joshua Oppenheimer was one of the 9th ZagrebDox award winners and definitely one of the titles that caused most stir in the international film circuit. At ZagrebDox – one of the first festivals that screened it – it won the Movies That Matter Award, as well as the European Film Award in the best documentary category, CPH:DOX Grand Prix and two awards at the Berlinale: the Panorama audience award and the Ecumenical Jury Prize. The local audience can see it again at ZagrebDox, in the My Best Dox category that includes films from previous editions of ZagrebDox selected by Croatian film criticsIgor Bezinović, Dragan Jurak, Mario Kozina, Višnja Pentić, Nenad Polimac and Mima Simić.