'Return to Homs' and 'Happiness' Win Awards at Sundance!

The 10th ZagrebDox international competition offers an outstanding film experiment made by the acclaimed Polish documentarians Marcel and Pawel Lozinski. 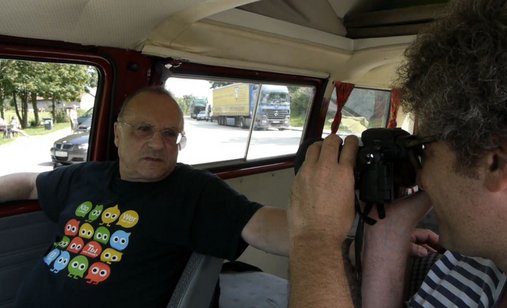 These are in fact two films – Father and Son, signed by Marcel Lozinski, and Father and Son on a Journey, signed by his son Pawel Lozinski. The two of them decided to take their old VW to Paris, to visit the grave of Marcel Lozinski’s mother. They were shooting throughout the entire trip with the intention of making a documentary film, but soon the creative geniuses collided and created two separate films offering two different views on their relationship (view TRAILER).

Marcel Lozinski made numerous brilliant documentaries including How It’s Done (2006), Anything Can Happen (1995), Microphone’s Test (1980), Front Collision (1975), The Visit (1974), and his documentary film 89 mm from Europe (1993) was nominated for the European Film Academy Award and Oscar. For the last four years he has been chairing the documentary course at Andrzej Wajda School. In 2008 the ZagrebDox audience had a chance to see a selection of his films in a retrospective programme.

Pawel Lozinski is a director, screenwriter and producer of documentary and fiction films. He made the documentaries Chemotherapy (2009), Kitty, Kitty (2008), Between the Doors (2004), The Way It Is (1999), Sisters (1999), Birthplace (1992). Last year his film Inventory was shown in ZagrebDox competition.