A Day on the Drina 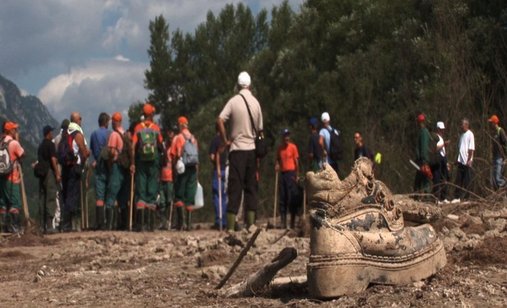 +
In august 2010 body remains of more than 250 incomplete skeletons were found in the mud of the artificial lake Perućac...

In august 2010, during the repair of the turbines of the hydroelectric power plant Bajina Bašta, body remains of more than 250 incomplete skeletons were found in the mud of the artificial lake Perućac; the remains belong mostly to the Bosniaks killed by members of the army of Republika Srpska in Višegrad and its surrounding area in the period of 1992/95.

Ines Tanović was born in Sarajevo. She graduated from the Academy of Performing Arts in Sarajevo, department of dramaturgy and has been a member of the Association of Filmmakers of BIH since 1988. She wrote and directed six feature movies: Circles (1987), Idea (1989), Man S (1991), Syndrome (1998), Sugarfree (2001), Starting Over (2010), as well as the Bosnian part of the omnibus Some Other Stories (2010). The film has been invited to more than 35 world festivals. She is the author of the documentaries Exhibition (2008) and A Day on the Drina (2011), as well as a large number of industrial films and commercials.