Artists' roundtable on reconciliation, premieres of two Croatian films - Goran Devic's 'Two Furnaces for Udarnik Josip Trojko' and Đuro Gavran's 'The Verdict' and a number of other marvellous documentaries! 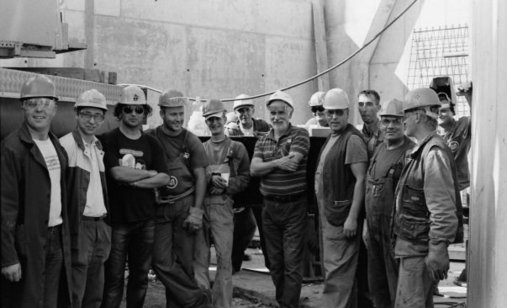 Two Croatian documentaries open on Thursday at ZagrebDox: Two Furnaces for Udarnik Josip Trojko by Goran Dević and The Verdict by Đuro Gavran. Two Furnaces for Udarnik Josip Trojko depicts the remains of a formerly large iron industry in Sisak and registers the dismantling and cutting of the famous Siemens-Martin furnace that used to be the very centre of the former iron mill.

The Verdict documents the eruption of emotions caused by the verdict in a series of close-ups when several thousand people gathered in Zagreb’s central square to watch the live transmission of the sentencing of Croatian generals. The screening of Two Furnaces for Udarnik Josip Trojko takes place at 7pm, while The Verdict is scheduled for 9pm, theatre 1.

Thursday at ZagrebDox begins at the festival centre, 11am, with a presentation of new distribution models – Distrify. Peter Gerard is a director, producer and film distribution innovator who will present the tools that help you present your film anywhere on the Internet. Distrify is available to everyone, from large Hollywood film studios to independent low-budget filmmakers. Check out how it works and how it can be of use to you at this presentation.

At 12am, theatre 2, the international competition entry While You Were Gone is scheduled; the story of a man on turning point in life, thinking about the difficult relationship with his father. Three regional competition films follow: Stremt ’89 about 1989 in Romania, with anti-communist revolution in the streets of large cities. Twenty-two years later this film shows what people think they did, what they think they should have done and would it be better if they had done something else.

Star Dust is a film about Aleksandar Aco Nedeljkov, a 14-year-old who ruminates like an old wise man about the issues of the beginning of life, phenomenon of life, sense, future on Earth and in the universe. The final film in this series is the one by multimedia artist Ivan Faktor Strange Fruit. This is an introspective moment of an individual who becomes aware of certain events that demand our immediate presence.

Mama Illegal is an Austrian film by Ed Moschitz – a story about three women seeking job and happiness in Austria and Italy, while their children are being raised back home by distant relatives. The film is scheduled for 2pm, theatre 5.

At 5pm, theatre 1, The Tundra Book. A Tale of Vukvukai, the Little Rock will be screened. The deer herdsman Vukvukai lives in the depths of Chukotka peninsula; this is an old man full of energy and wisdom, a true tundra man whose life was known only by the deer. This is a story about struggle for survival and well-being in the harshest weather conditions of Chaun Bay in Chukotka.

The film Karsu is a musical documentary about the young songwriter Karsu Dönmez, called the Dutch version of Norah Jones. This talented jazz singer grew up in a Turkish family in Amsterdam. She sings and plays piano passionately in her parents’ Turkish restaurant. The film is scheduled for 8pm, theatre 4, and the same evening at 10pm Karsu will host a free concert at the festival centre!

At 10pm, theatre 2 screens two regional competition films: 24 Buckets, 7 Mice, 18 Years – in a quiet and isolated world we meet a couple whose survival starts to depend on interaction with a different world and internal absurdity. Playing the Fool is next, a film about Redžo, a man who pretended he was insane in order to avoid the war in Bosnia in 1992 and joined the group of psychiatric patients taken to Hungary in a refugee camp. He did not dream he would spend the next 17 years locked up with them, waiting for the Bosnian officials to remember to claim them back.

Related to the screening of Dino Mustafić’s An Artist’s View of the Past (10pm, theatre 4), at 2pm a roundtable will take place at the festival centre. In addition to Dino Mustafić, the film director, and the production team of Koalicija za Rekom, several artists and activists from the region will gather: Nina Violić, Urša Raukar, Zoran Predin, Vesna Teršelič and others. They will discuss reconciliation from a different point of view.