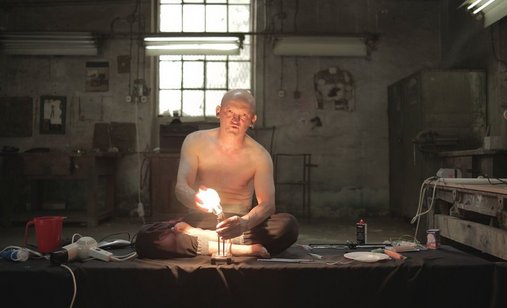 In Awakening, Irena Fabri portrays three young people from Belgrade, belonging to the generation that represents a new class, the so-called marginal elite: successful students, future artists and intellectuals who do not see their places in the future of the Serbian society. Battery Man is a film about the man of the same name, suffering from ectodermal dysplasia which makes his extremely resistant to high voltage and can control it. Thanks to his entrance in the Guinness Book of World Record, he became a star of many shows around the world.

Friday at ZagrebDox begins at 10am with a Pitching Forum open to public; Leena Pasanen and Stefano tealdi will moderate the forum hosting directors and producers of 13 documentary films at different phases of development, coming from 11 countries to present themselves to a panel of TV editors, representatives of film centres and distributers.

Theatre 1 at 1pm will screen the international competition entry Kudzu Vine – this cinematic ode to the kudzu vine poetically accentuates its connection with the people of American South. The regional competition film Close-up in Total follows, based on the idea of director Slaviša Mašić about more than 200 shows of the TV serial In the name of the People by Josip Pejković and Allmanah drama studio. In front of the camera, forgotten by many of the protagonists, emotions flow, tears run, smiles open and problems unload.

The Dark Side of the Sun is a regional competition entry, the story about children whose fatal enemy is the sun. Xeroderma pigmentosum is a rare condition that forces them to live far from any source of sunlight, away from the everyday lives of their peers. However, this is not so in Sunset camp, New York. The film is scheduled for 2pm, theatre 4.

Theatre 5 at 6pm screens Danube Hospital. Describing a modern health institution, this film is a mirror image of our society and its relationship with health and sickness, life and death. Director Nikolaus Geyrhalter observes what happens in a number of zones: conference rooms, operation rooms, patient rooms, sterile areas, pathology departments and kitchens.

Musical Globe presents two films: Disclosing Afion and Jazz Apartment, scheduled for 9pm, theatre 1. Disclosing Afion is a story about young musicians who are trying to define their views on ethno music, but also to understand dynamics shift within the band, their meetings and separations. Jazz Apartment is a story about Kamene jazz tavern, located within the stone wall of Bale, a small and quiet medieval town in mainland Istria, hosting the largest non-profit jazz festival in the country for six years.

At 10pm, theatre 5, you can choose Happy Dox: Queen of Versailles is the latest film by American filmmaker, artist and photographer Lauren Greenfield, the winner of best documentary directing award at last year’s Sundance Film Festival. Jackie was the 1993 Miss Florida, now the wife of billionaire David Siegel, the self-proclaimed real-estate king. She has a clear goal – to build the largest house ever seen on the American territory, inspired by the French palace of Versailles.

Due to large interest, an additional screening of Mansome is scheduled – this hilarious view on the world of man and male beautification, coming from director Morgan Spurlock and executive producers Will Arnett, Jason Bateman and Ben Silverman, is screened at 11pm, theatre 1.