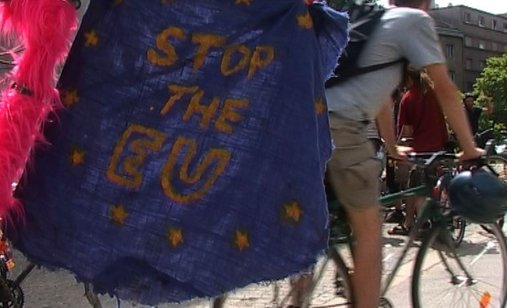 +
An employee of the Ministry was fired because of this report.

While traveling through Eastern Europe on bicycles, on their way to Thessalonica where the EU summit will be taking place, a group of activists from EU countries visited Zagreb. On their way, they highlight the problems of immigration policy and, as they put it, the closing of ‘Fortress Europe’. They expressed their disagreement with a peaceful protest in Zagreb's Flower Square, during the marking of the Europe Day. Special police arrested five activists, although, according to the loudspeaker of the Ministry of European Integration, there was no need for that. An employee of the Ministry was fired because of this report.

lOliver Sertić is a documentary producer and festival programmer from Zagreb, currently living in Berlin. So far he has produced around 30 feature and short documentary and experimental films. For 18 years he worked as a journalist and editor-in-chief in different media and organiser of different cultural events. He is the founder of Restart (2007) where he established Restart Laboratory, Dokukino and Restart Label. Has cooperated with numerous film festivals as a PR, programmer, producer and advisor (Zagreb FF, ZagrebDox, DokuFest, Vukovar FF, Makedox, DORF, RAF, Supetar Super FF, Moldox…). Since 2007 he has been the programmer and since 2012 the director of Liburnia Film Festival, a Croatian documentary film festival, in Opatija.

Iva Kraljević is a cinematographer and editor. She worked together with numerous Croatian filmmakers and directors of experimental films. Her most prominent works include numerous episodes of the documentary series 'Direkt', feature-length films 'Cloud' and 'Gabriel' and experimental films 'Cry' and 'Soccer'.