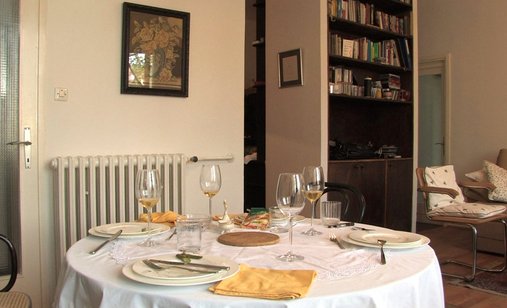 +
Do you remember the last time you've talked to your parents?

Do you remember the last time you've talked to your parents? What did you talk about? Have you gone step further from weather forecast and daily politics? Five years after last gathering, a birthday celebration brings together an ordinary four member family. They start questioning what made them turn away from each other... Can having a conversation about buried family secrets help them eat without cramps in the stomach in the future? Can a failed birthday cake help them overcome the past? Through the ritual of family meals, the film tells how important is for us to feel accepted by our loved ones.

Dana Budisavljević graduated from the Zagreb Academy of Dramatic Art, Department of Film and TV Editing. She worked as an editor, director and producer of creative documentary films and TV series, including Straight A! (director), Years of Rust by Andrej Korovljev (editor and co-script writer), Great Shipwrecks of the Adriatic by Davor Šarić (co-director), New New Time by Igor Mirković and Rajko Grlić (editor), Changing the World (producer and director of several episodes). Her second documentary film Family Meals screened at over 20 festivals, won a few awards and was successfully distributed in Croatian cinemas. She is currently preparing the feature documentary live action hybrid film Diana’s List. Together with Nenad Puhovski in 2005 she launched ZagrebDox, and with colleague Olinka Vištica she founded the Hulahop company a year later. She attended a series of international workshops, including Ex Oriente, EURODOC, ZagrebDox Pro, Sarajevo Docu Rough Cut Boutique, BDC Discoveries and others. She is a member of the Croatian Producers’ Association board of directors.