THE EMBRACE OF THE RIVER 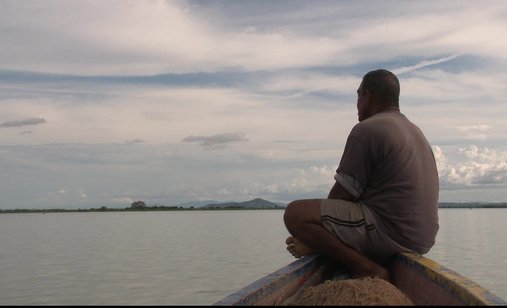 +
A brooding, meditative piece that is both beautiful and horrifying.

Life on the Magdelena, the largest river in Colombia, is dominated by the Mohan, a mythical river monster who teases the fisherman, entangling their nets. He lives deep in the waters, smoking tobacco and swigging aguardiente, the local alcohol. A greater charmer, the Mohan lures the most beautiful women down to his golden palace, deep under the water. From there, melodic music rises to the surface. Some women come back pregnant; others never come back at all. But these days, the local people have an even greater fear than Mohan – the paramilitary, which has struck terror into the hearts of all, even the devil. Now all the Magdalena River conceals in its depths are corpses... A brooding, meditative piece that is both beautiful and horrifying, this is the second instalment of director Nicolas Gille’s planned trilogy on the life of peasants living amongst nature and violence.