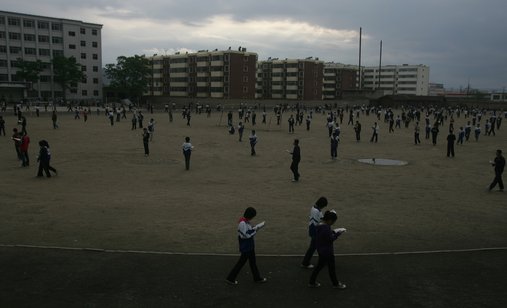 'China Gate' tells the story of young Chinese fight to change their fate through studying. Right before dawn, students in Huining have already started their self-studying session; hard working youngsters have filled up the space of school ground. This is one of the most poverty-stricken Counties in Western China; here people's only hope is in education, as the way to change their social status. Therefore all their effort point towards the College Entrance Examination, the process is like going through a gate, those who pass can study at urban Universities, and have the chance to build a better life. During the same winter season in Beijing, a graduate student faces a big decision. Should he keep trying to survive in the big city or get back to his countryside home? The exhausted faces at the Beijing underground seem to be revealing the truth about their distance in between. The student comes to see the flag ceremony at Tiananmen Square, where the pulsing symbol of the nation lies. However it is not giving any answer to his anxiety.

Yang Wang was born in Xi’an, China. Has an BA of law. He is an independent director dedicated to documentary fi lmmaking. Since 2007 he directed and produced four documentary films.