On Monday at 11pm you can see 'Mondo Cane', a shockumentary by the Italian trio Jacopeti – Prosperi – Cavara that has laid the foundation for a popular super-genre, "lending" it its name at the same time. 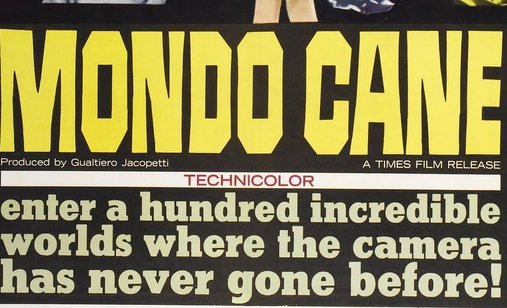 The movie claimed to be as graphic and crude as reality was, despite the depicted reality being re-enacted most of the times – often goofl y and excessively – and the movie leaving the audience unaware of watching something fictitious. But this was no news to the movie market. Pseudo-documentary or pseudoscientific films – often mere exploitative eff orts – were shown to audiences in sideshows since the beginning of 20th century. Soon other kinds of educational b-movies came to life, including the infamous ‘Classroom scare films’, inaccurate and creepy ‘educational’ pieces to be shown to school audiences. Luca Persiani (printed in Off screen Magazine)

The Mondo Dox program of this year's ZagrebDox starts with the famous mondo film 'Mondo Cane' ('A Dog's World'), in Auditorium No. 1 on Monday at 11pm. The film has lent its name to this super-genre / sub-genre. It is an exploitation movie about unusual customs all over the world: we see natives hunting people, an Asian woman buying fresh snake meat, Rudolf Valentino's descendants in Italy… American fixation on cars is juxtaposed with their final resting-place – a scrap yard (or a Parisian gallery). We can see a well-known French artists (Yves Klein, one of the founders of New Realism) manipulating nude models painted in blue. He persuades them to act "painting brushes" while he creates a new "masterpiece" of modern art. Having seen how the footage he appears in had been used, Yves Klein had a heart attack at the film's premiere in Cannes.

On Tuesday at 11pm, ZagrebDox presents 'Women of the World’, a film made by the directing trio Jacopetti – Prosperi – Cavara. Made between 'A Dog's World' and its sequel, this shockumentary aims at dispersing prejudices about women and showing how important they are for our planet. The camera follows Israeli female soldiers on training and after it, while changing their uniforms; there are models posing for obscure magazines, and the topless sunbathing ritual is also examined. Throughout the world, sex still sells and women are exploited. We watch prostitutes walking the streets and sitting in the shop windows of specialized districts. We even get to visit night clubs with scandalous programs. Posing in nude for money is discussed, and so is the unusual profession of "paid wailers".

In early 1960s, many African nations gained independence from their former colonial masters, Great Britain, France and Portugal. For three years, the authors of 'A Dog's World' had been combing the Dark Continent in order to become acquainted with the politics of the newly-emerged states and reveal the terrifying truth about the Africa "abandoned by Mother Europe". The result of these efforts was the film 'Africa Adio', which can be seen as part of ZagrebDox program in Auditorium No. 1 on Wednesday, 29 February at 11pm.  (bilo bi mi logičnije da piše 'as part of Mondo Dox program, a ne ZagrebDox program; isto vrijedi i za prethodni pasus…)

On Thursday, we will be showing David Gregory's ‘The Godfathers of Mondo’, a film about the cooperation of Gualtiero Jacopetti and Franco Prosperio and their films. These elderly Italians with their roots in documentary film (Jacopetti) and natural science (Prosperi), the authors of the pivotal film 'A Dog's World', are full of life stories. Without any shame they express their disgust towards horrible mutations of mondo films that ensued after their success and they willingly highlight their own failures ('A Dog's World 2') and their genius ('Africa Adio'). Other crew members (including great cinematographer Benito Frattari, exceptional composer Rizo Ortolani and production manager Giampaolo Lomi) also provide an insight into the process of making of these films.