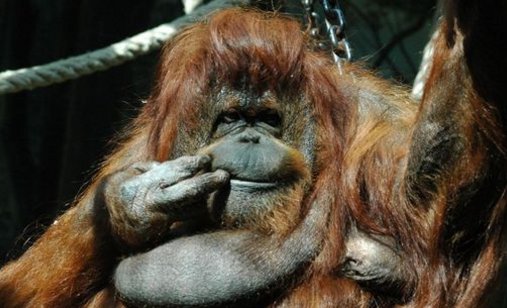 Nénette is introspective, perhaps melancholic, but beloved by those who visit her daily. After ‘having worn out three husbands’ and given birth to four children, she’s convalescing from major surgery, and looks forward to life’s simple pleasures, like tea and yogurt at 4:30 each afternoon. Nénette is an orangutan in the famed Jardin des Plantes Exotiques zoo, and Philibert captures her day-to-day routine in this charming, poignant and wonderfully funny portrait. She’s one of our closest relations — the one with an enviable chunk of Paris real estate to call her own.

Nicolas Philibert was born in 1951 in Nancy (France). After studying philosophy, he turned to film and became an assistant director, notably for René Allio, Alain Tanner and Claude Goretta. In 1978, with Gérard Mordillat, he co-directed his first documentary feature, His Master’s Voice (La voix de son maître) in which a dozen bosses of leading industrial groups talk about control, hierarchy and power, gradually sketching out the image of a future world ruled by the financial sector…From 1985 to 1987, Nicolas Philibert shot various mountaineering and sports adventure films for television (Christophe, Trilogy for One Man, Go For It, Lapébie!, Baquet’s Come Back) then started directing documentary features that would all obtain a theatrical release: Louvre City (La ville Louvre, 1990), In the Land of the Deaf (Le pays des sourds, 1992), Animals (Un animal, des animaux, 1995), Every Little Thing (La Moindre des choses, 1996), at the La Borde psychiatric clinic, as well as a film essay pitched between documentary and fiction, with the students of the school of the Strasbourg National Theatre: Who Knows? (Qui sait ?, 1998). In 2001, he directed To Be and to Have (Etre et avoir), about daily life in a «single class» school in a mountain village in the heart of the Massif Central (France). Screened as part of the Official Selection at the 2002 Cannes Festival, Prix Louis Delluc 2002, the film was a huge success in France and around forty other countries. In his recent film, Back to Normandy (Retour en Normandie, 2007), he returned to the settings of I, Pierre Rivère, Having Slaughtered My Mother, My Sister and My Brother… by René Allio, the director who allowed him to take his first steps in film.