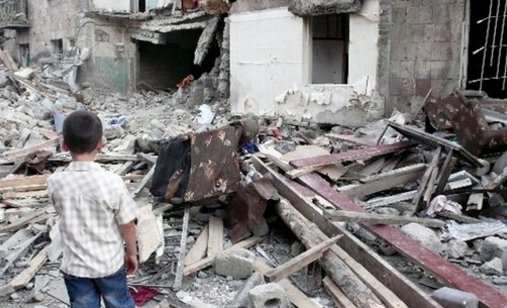 +
The film is a political fable that depicts the frail equilibrium of the world and questions the values of international politics.

It takes us through a critical and violent year in the life of Georgia’s young and fragile democracy – from the presidential election of January 2008, when everything seemed possible, to the chaos of the August war with Russia and the sobering aftermath and raises questions about political responsibility and the morality of international affairs. The story is told through its main actors: the Georgian president, the Georgian government, the political opposition, foreign leaders , international delegations and organisations and the ordinary Georgian people. Georgia is seen as the stage of a Greek theatre on which various players of international politics are performing their roles.

European Film Academy-award-winning director Nino Kirtadze was born in Tbilisi, Georgia. She is one of the few Georgian directors who made her cinematic debut in France and quickly established herself as one of the best documentary directors worldwide. She focuses on controversial subjects, placing the accent on the human drama and creating deep insightful human portraits. Her films have won international acclaim and numerous prestigious prizes at festivals worldwide, including Best Director Prize at Sundance for Durakovo - Village of Fools, the European Film Academy award for Pipeline Next Door, Germany’s top documentary award, the Adolf Grimme Gold, for Chechen Lullaby and the Cinema du Réel award for Tell My Friends That I’m Dead. Her films have been presented at top world festivals, including Cannes, Toronto, Sundance, IDFA and RIDM. Nino Kirtadze is also a scriptwriter and actress. During the troubled years in the Caucasus in 1990s she also worked as a war correspondent for the AFP and for the AP, covering the war in Chechnya and other armed conflicts in the region. Since 1997, Nino Kirtadze has been living in France and working with Peter Brook, Ben Gazzara, Vittorio Gassman, Jean-Pierre Ameris and Claude Goretta. She works on a regular basis with different national and international organisations and film schools as a consultant, jury, lecturer and tutor.