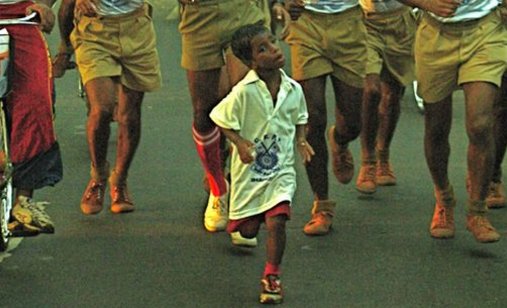 Born into the slums of Bhubaneswar in the eastern Indian state of Orissa, Singh’s mother sold him to a peddler for 800 rupees. Not long after Biranchi Das, a judo teacher who also runs an orphanage, bought him back, and soon discovers Budhia’s talent for running… But when Biranchi has the four year old Budhia run 42 miles, the debate begins: is he providing Budhia with a rare opportunity, or is he exploiting a boy too young to know what he really wants. When the government gets involved the case becomes a political football, and rumours of vast sums of money attract gangsters eager to drive a wedge between Biranchi and Budhia. What starts out as a real Slumdog Millionaire turns into a stuff of film noir, a tale of dreams, greed, and envy, with a child at its centre.

Gemma Atwal has worked as a freelance director and producer on a variety of feature documentary, factual and observational documentaries. She has also spent three years working as a development producer for independent UK production houses, earning commissions in human interest, wildlife & adventure, and science programming. Prior to documentary work, Gemma spent four years working as a journalist in Africa, South-East Asia and Europe for the NOA Media Group of Companies in Madrid. She also gained experience in radio broadcasting, initially training through the BBC and later working for Nigerian State Radio as an on-air reporter. Gemma has a First Class MSc in International Human Rights and a Double First Class Honours degree in Literature & Politics. Gemma is co-partner in One Horse Town Productions. ‘Marathon Boy’ is her first theatrical documentary and was filmed in the slums of Orissa over 5 years.

Produced by:
A One Horse Town Productions & Renegade Pictures Co-Production for HBO & BBC