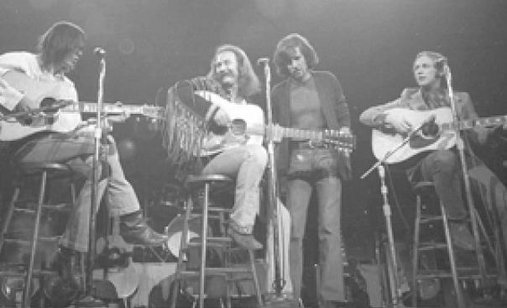 Since their debut in the late ‘sixties, Crosby, Stills, Nash and Young have functioned as the ‘town criers’ of their generation. With songs like ‘Ohio’ and ‘Find the Cost of Freedom’, CSNY were in the forefront of Vietnam-era protest and anti-war sentiment. Though fondly remembered for their harmonies and love songs, the band has never lost their political edge. ‘CSNY: Deja Vu’ finds the band heading out on their ‘Freedom of Speech 2006’ of North America, featuring music from Neil Young’s controversial ‘Living With War’ CD. With ‘Embedded’ reporter Mike Cerre aboard, the film documents audience reactions to the music and the band’s ongoing connection with its fans, all against the backdrop of the Iraq/Afghanistan War. The film also examines events surrounding the Tour in the crucial election season of 2006. Songs from the Tour are woven together with archival material, news footage, and audience reaction and observations, as the film examines the issues surrounding the integration of politics and art.

Bernard Shakey is Neil Young’s alterego. Young has directed (or co-directed) a number of films using the pseudonym Bernard Shakey, including ‘Journey Through the Past’ (1973), ‘Rust Never Sleeps’ (1979), ‘Human Highway’ (1982), ‘Greendale’ (2003), and ‘CSNY Déjà Vu’ (2008). He is currently working on a documentary about electric car technology, tentatively titled ‘Linc/Volt’.