From Here to Tralala 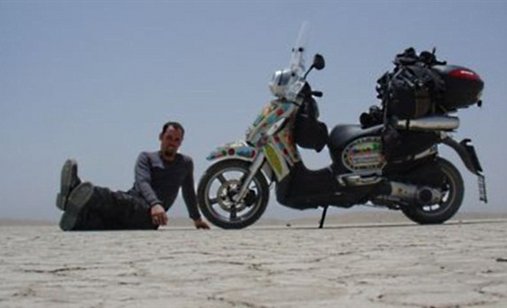 Belgrade ferries, belly dancers, the curse of Aia Sofia, Fata Morgana (mirage), Ćiro Blažević, camel hunters, heroin smugglers, the most dangerous road in the world, rockslides and torrents, paths that were not trodden even by Michael Palin, gold washers, the Marko Polo sheep, a Tajikistan wedding party – all in one place. This documentary follows people by the Silk Road that the author traveled on two occasions; immediately before September 11, 2001 and seven years thereafter, in 2008. All you cannot see on CNN and the BBC you will see in a documentary road film From Here to Tralala.

Boris Veličan was born in 1977. After he completed the Archbishopric Classical Gymnasium, he enrolled into the study of Latin and history. As early as 1999 he set off with his colleague Marko Račan on the Roads of the Inca in South America, and thereafter in 2000 did the Morocco tour by car, a year later went to China, in 2002 to Japan, and in 2004 entered into the legend – having the elder of the Seljan brothers, Mirko, as a role model, when it took him 84 days to walk 2,609 kilometers from St. Petersburg to Paris. He reflected this trip in the travel book ‘Every Day Is a Sunday to Me.’ Having graduated from the Production department at the Academy of Drama Arts, he worked as producer in Jadran Film company, and today works at the Academy of Drama Arts in Zagreb and plans his next big trip.